Finance Minister Arun Jaitley said that when the BJP government came to power in 2014, it had the choice to look the other way and allow the shadow economy to continue, but it did not do so. 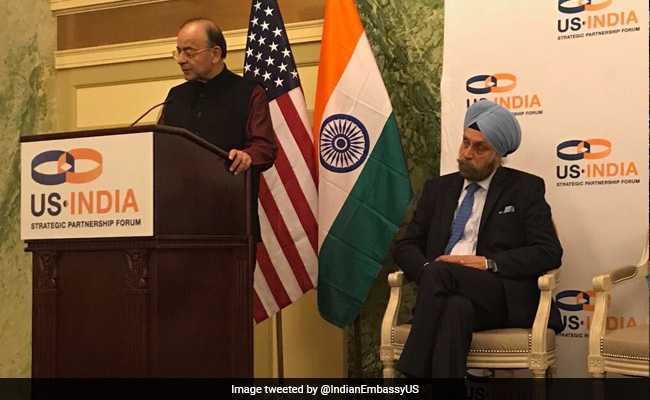 Washington: Finance Minister Arun Jaitley said on Friday that India has the potential to grow at a reasonably high level in the next decade or two, citing structural changes by the government and a turnaround in the global economy.

The whole environment of doing business has changed in a matter of months, Mr Jaitley told a Washington audience at an event organised by the US-India Strategic and Partnership Forum.

"India has the potential to grow at a reasonably high level in the next one-two decades. This is mainly because of the series of structural reforms being carried out by the government, turnaround in the global economy, and the massive investment opportunity that the infrastructure sector offers," said Mr Jaitley.

"I am certain that now that the growth is returning back to the world, the future holds an important direction as far as India is concerned. The sheer size of the country and economy would offer huge opportunity for investment in India in the next few years," he said.

Mr Jaitley said that when the BJP government came to power in 2014, it had the choice to look the other way and allow the shadow economy to continue.

"But it did not do so, as it took a series of courageous steps which ultimately culminated in demonetisation of high-value currency," the Finance Minister said.

The government knew that there would be short-term impact on the economy, Mr Jaitley said, "but, in the long term, it would benefit the country," he told a gathering of investors and corporate leaders.

In an effort to pitch India as an investor-friendly destination, the Finance Minister said that his government had taken a series of steps to improve the ease of doing business.

"India today is one of the most open, globally integrated economy. In the last few years, we are moving up the ease of doing business ranking," he said, as he listed out some of the key initiatives by his government.

Among these are the "massive steps" that the Indian government has taken in using new digital technologies for governance and making them beneficial to the people, Mr Jaitley said.

"Today, almost everyone is connected to the banking system. Almost every adult in India has biometric. The integrated data has helped the government to reach every citizen on digital platform," he said.

"This has helped us save billions of dollars," he said, adding that India is now using technology "in a big way" in order to ensure that the resources reaches the intended population.

Speaking about the Goods and Services Tax (GST), Mr Jaitley said it was "a more efficient system which has brought the country together, even economically, allowed free flow of goods and services across the country."

However, he conceded, that it could cause disruption for a quarter or two.

The event closed a week of meetings that the minister attended in the US, including the annual meetings of the International Monetary Fund and the World Bank.

Members of the USISPF audience included senior representatives from companies such as Apple, Boeing, Google, etc. while senior officials from different departments of the US government also participated in the programme.

Mukesh Aghi, president of USISPF, noted the importance of the minister's visit, saying India had witnessed vast reforms and gained an ability for significant economic growth in the last few years thereby opening it to huge investment potential.

"US companies and investors are very much aware of the reforms the Indian government is making in order to expand the economy," he said.

"With future reforms and increased partnership between US and Indian businesses, there is promising potential for this already important relationship," he said.
Comments
Arun JaitleyFinance minister