These Made-in-India motorbikes were handed over Dr Ausaf Sayeed, Secretary (CPV & OIA), during his Lebanon visit on October 03-04. 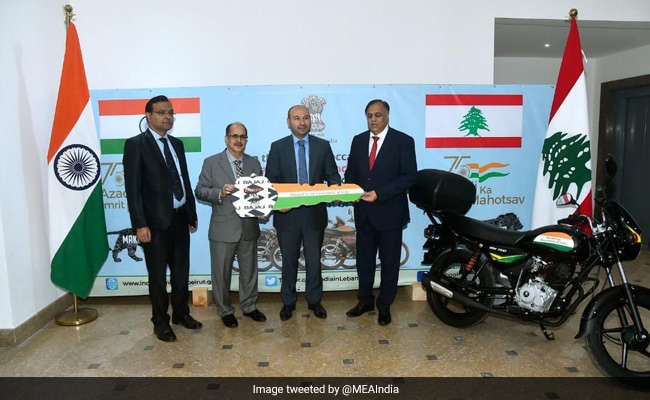 These Made-in-India motorbikes were handed over Dr Ausaf Sayeed.

India handed over Made-in-India motorbikes to the Lebanese government as part of bilateral assistance, the Ministry of External Affairs (MEA) said on Monday.

These Made-in-India motorbikes were handed over Dr Ausaf Sayeed, Secretary (CPV & OIA), during his Lebanon visit on October 03-04. "Prior to his official visit, he visited Syria on 02 October 2022," MEA said in a press release.

He called on the Minister of Foreign Affairs and Emigrants of Lebanon Dr Abdallah Bou Habib and discussed a range of bilateral, regional and international issues of mutual interest.

"He also met with Hani Chemaitelly, Secretary General of Ministry of Foreign Affairs and Emigrant. Both sides identified key areas of bilateral cooperation during the meeting, including trade, people-to-people contact, vocational training, etc. Secretary (CPV & OIA) is also going to meet the Governor of Beirut City," the ministry said.

Secretary (CPV & OIA) also participated in a high-level Business Seminar which was attended by Minister of Industry George Bouchekian. A number of areas for enhancing trade were identified including food and agro-business, pharmaceuticals, gems and jewellery, electronics, solar batteries, small vehicles etc.

The Lebanese side was also appreciative of the positive role played by the Indian Battalion at United Nations Interim Force In Lebanon (UNIFIL).

The visit of Secretary (CPV & OIA) to Lebanon has renewed the bilateral relations and will pave the way for stronger relations in future.