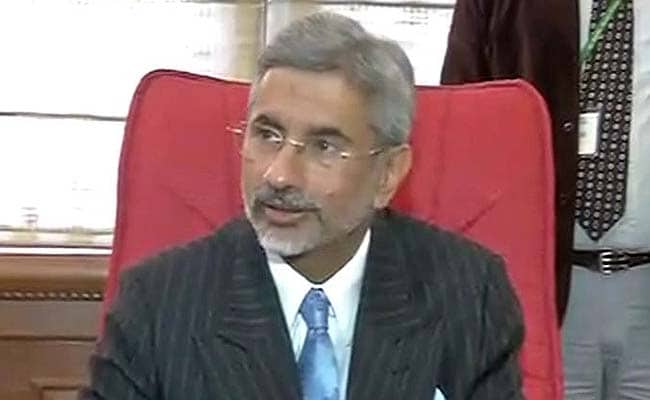 India is committed to strengthen its multifaceted and mutually beneficial relationship with Nepal and supports the aspiration of Nepalese people for peace and stability, Foreign Secretary S Jaishankar said as he arrived in Kathmandu today on a two-day visit.

Upon his arrival at the Tribhuwan International Airport this morning, Mr Jaishankar said the visit is the part of his SAARC Yatra and reflects the importance the government of India accords to its relations with Nepal.

"During my stay here I hope to review progress made in our bilateral cooperation following the historic visit by Prime Minister Narendra Modi to Nepal last year," he said.

India is committed to strengthen its multifaceted and mutually beneficial relationship with Nepal as part of its 'Neighbourhood First' policy, he said.

"We support the aspiration of the people of Nepal for peace, stability, prosperity and progress," he said.

The Foreign Secretary today held bilateral meeting with his Nepalese counterpart Shanker Bairagi and paid a courtesy call on Foreign Minister Mahendra Pandey at the Ministry of Foreign Affairs.

During the high-level meetings, the two sides discussed bilateral cooperation and matters relating to mutual interest, according to Foreign Ministry sources.

During the talks, the Foreign Secretary sought Nepal's support for India's candidacy for the UN Security Council, Mr Pandey told reporters after the meeting.

Both sides have agreed to expedite the decisions made during the visits of Prime Minister and Indian External Affairs Minister in the past, he said.

Mr Jaishankar is scheduled to call on President Ram Baran Yadav and Prime Minister Sushil Koirala and other senior leaders during the visit.

Promoted
Listen to the latest songs, only on JioSaavn.com
He is scheduled to meet UCPN-Maoist chief Prachanda at his residence in Kathmandu.

The Foreign Secretary will address the media at the airport before his departure to Delhi tomorrow.
Comments
S JaishankarNepalIndiaSAARCSushil Koirala