India handed over humanitarian assistance worth over SLR 2 billion (Rs 43.8 crore) to Sri Lanka which reached Colombo on Sunday. 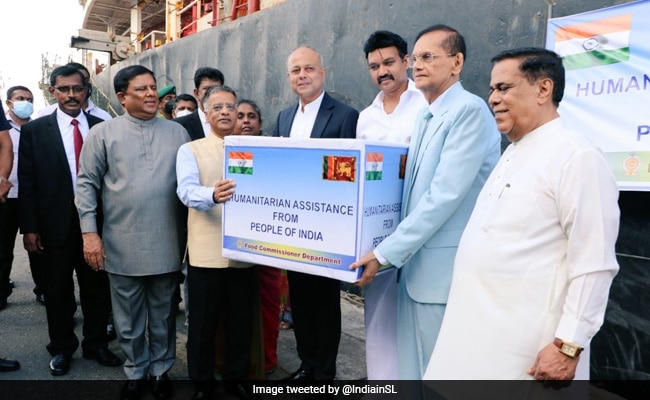 The Indian High Commissioner handed over the consignment to senior leaders of the Sri Lankan government.

As Sri Lanka grapples with a massive economic crisis, India handed over a large amount of humanitarian assistance consignment worth over SLR 2 billion (Rs 43.8 crore) to the island country which reached Colombo on Sunday.

The High Commissioner of India in Colombo, Gopal Baglay handed over the consignment to the senior leadership of the Government of Sri Lanka, reported Colombo Page.

Taking to Twitter, the Indian High Commission to Colombo said, "A message of care! From the people of to the people of ...High Commissioner handed over rice, milk powder& medicines worth more than SLR 2 billion to Hon'ble FM Prof.G.L Peiris in #Colombo today. Hon'ble Minister @nimaldsilva, @VajiraAbey, @SagalaRatnayaka, @S_Thondaman."

A message of care!!! From the people of ???????? to the people of ????????...High Commissioner handed over rice,milk powder& medicines worth more than SLR 2 billion to Hon'ble FM Prof.G.L Peiris in #Colombo today.Hon'ble Minister @nimaldsilva, @VajiraAbey, @SagalaRatnayaka, @S_Thondamanpic.twitter.com/WNDoSiQPjE

Earlier, the Indian High Commission also tweeted: "People of #India, standing by their bretheren in #SriLanka. Rice, milk powder and medicines worth more than SLR 2billion is scheduled to reach #Colombo on Sunday."

The consignment will be distributed among several beneficiaries across the country by the Sri Lankan government, reported Colombo Page. The beneficiaries include Northern, Eastern, Central and Western provinces, covering diverse sections of the society.

Further, various private and social organizations from India have also aided Sri Lanka to meet the urgent requirements of the island country. This support for Sri Lanka among the people of India is in addition to the Indian government's economic assistance, which has totalled approximately USD 3.5 billion since January this year.

Previously, the Indian government has also sent out dry rations, medicines, and other essential commodities to Sri Lanka on a grant basis, reported Colombo Page.

Meanwhile, Sri Lanka is facing its worst economic crisis since its independence with food and fuel shortages, soaring prices, and power cuts affecting a large number of the people, resulting in massive protests over the government's handling of the situation.

India is becoming a stronger and more mutually beneficial partner to Sri Lanka. Apart from assistance during the pandemic and fertilizer chaos, in which India delivered nano fertilizer to save Sri Lankan farmers, now New Delhi has pledged nearly USD 3 billion to cash-strapped Colombo through currency swaps, credit lines for essential goods and repayment of loans since January 2022 to help Sri Lanka amid one of the worst economic crises in history.