"First Flight" Surprise For These Migrants, Scenes Of Joy, Relief

The Supreme Court has taken up the case of the migrants, who have become the face of the millions of India's poorest hit by the coronavirus crisis, and has asked the centre and state to report on steps taken to alleviate their suffering.

An Air Asia flight took them on a special flight from Mumbai to Ranchi this morning.

They were resigned to their longest journey home, either on foot, or cycles, or hanging off a crowded truck. When they finally headed out, 177 migrant labourers stranded in Mumbai got a plane all to themselves.

An Air Asia flight took them on a special flight from Mumbai to Ranchi, Jharkhand, this morning. The flight was chartered by former students of the National Law School, Bengaluru, and a few NGOs who had raised money to help migrants across Mumbai.

The law school alumni started by crowdfunding a bus, eager to help after the harrowing stories of migrants stranded by the coronavirus lockdown suffering job loss, hunger, beatings and physical injuries in their desperation to get home thousands of kilometres away.

Then private airline Air Asia came forward and offered to subsidise their flight.

"We have been working closely with the organisers, alumni of the National Law School, who we understand have independently crowdfunded their efforts to assist and repatriate migrant workers from Mumbai to Ranchi," the airline said in a statement.

The group, including women and children, emerged from Ranchi's Birsa Munda airport early Thursday, their faces bright with joy.

Kamleshwar, 22, an auto driver who stopped earning after the ban on public transport in March, is relieved that he can finally meet his parents, brother and sister after weeks of suffering. He said he had been contacted by a former law school student, Priyanka Rai, who handed him a flight ticket.

"This was my first flight," he shared. 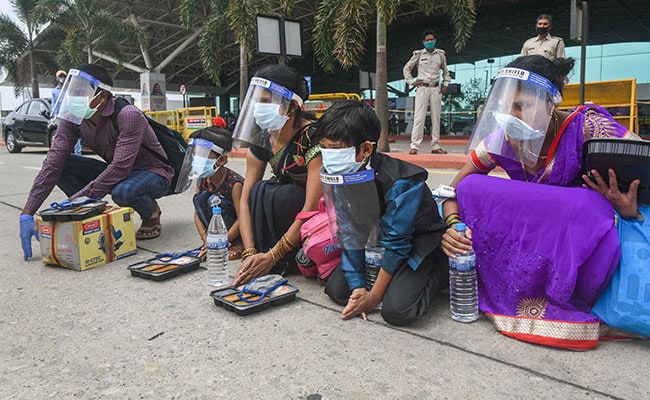 Aslam Ansari, a tailor, travelled with his wife and four children. "When the lockdown started, I had no job left in Mumbai. For a long time, I kept looking for ways to take my family home. When I came across this information, I immediately contacted the NGO," he said.

Mahendra also lost his job on construction sites. He had been struggling for his daily meals. "Then suddenly, one day, I got a call that I would get a flight ticket. I am grateful to get a chance to cover such a long journey in a short plane ride, and that too at no cost," he beamed at the airport, recalling the moment when a phone call changed everything for him.

The Supreme Court has taken up the case of the migrants, who have become the face of the millions of India's poorest hit by the coronavirus crisis, and has asked the centre and state to report on steps taken to alleviate their suffering.

Today, the Supreme Court asked the government at least 50 questions on food, funding, shelter of migrants and the entire logistics of transportation.

Calling the situation "unprecedented", the government said around 91 lakh migrants have been transported to their states since the special train service was started on May 1. Over the last days, the railways has provided 84 lakh meals to them, said the government, adding that it would not stop its efforts or the train service "till even a single migrant remains".