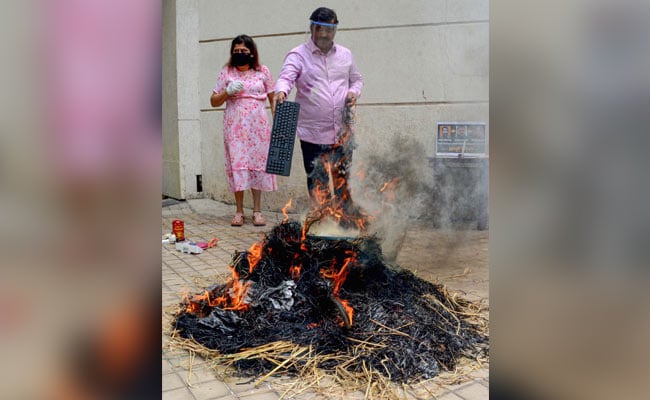 Calls to boycott China-made goods have erupted across India after 20 soldiers died for their country in a violent face-off with Chinese troops in Ladakh's Galwan valley late Monday night. The protesters have also demanded revenge and severing of trade ties.

According to reports by news agencies ANI and PTI, people are burning the Chinese flag, China-made products and effigies of President Xi Jinping; a video from Uttar Pradesh showed a former MLA attacking a mock-up of President Xi with an axe before it is burned by his supporters.

In Delhi the RWA (Residents Welfare Association) of Defence Colony, a posh neighbourhood in the southern part of the city, has "declared war on China".

In a five-minute audio message that has been widely shared online, Major Ranjit Singh (retired). who is president of the RWA, lashed out at the "brutal murder" of Indian soldiers and demanded that people boycott China-made goods.

More worryingly, he also said it was "unfortunate we cannot take up guns and bullets".

"You must have all got to know what happened. By treachery, unarmed officers and soldiers of the Indian Army were brutally murdered by the Chinese. This was total betrayal... nothing but murder," the major said.

"Today, as your president, I declare Defence Colony is at war. Unfortunately we cannot take up guns and bullets but definitely there are other means. We can break China's backbone economically and today I request you all, with immediate effect, shun Chinese goods and if you have any lying in your house, please throw them out," he added.

Anti-China protests also took place in UP's Varanasi, which is Prime Minister Narendra Modi's constituency, while protests were also seen in Patna in Bihar and Ahmedabad, Vadodara and Surat in Gujarat, where too photos of President Jinping and the Chinese flag were burned.

Residents of a housing society in Surat broke a China-made LCD TV in front of reporters to register their protest. "We hereby boycott all Chinese products. It is time we teach China a lesson," one of the protesters was quoted by PTI.

"I request Prime Minister Narendra Modi to conduct a surgical strike against China in the same way it was done against Pakistan. We have burnt pictures of the Chinese President and their flag to show our rage," a protester in Patna told ANI.

Similar protests, led by outfits like the Vishwa Hindu Parishad and Rashtriya Bajrang Dal, broke out at several places across the Jammu region, but were peacefully dispersed after burning tyres and blocking roads for 30 minutes, according to news agency PTI.

In response the Global Times, a Chinese government mouthpiece, said today it would be "extremely dangerous for India to allow anti-China groups to stir public opinion, thus escalating tensions".

Pointing out that the global economy had suffered due to the coronavirus pandemic, the article said the "economic boycott of China and Chinese products" would lead to huge losses to both countries.

This the first time fatalities have been reported in clashes between India and China since four Assam Rifles personnel were killed on the Indian side of the border in Arunachal Pradesh in 1975.

India has blamed the clashes on "an attempt by the Chinese side to unilaterally change the status quo there", rebutting China's claims that Indian soldiers crossed the border.