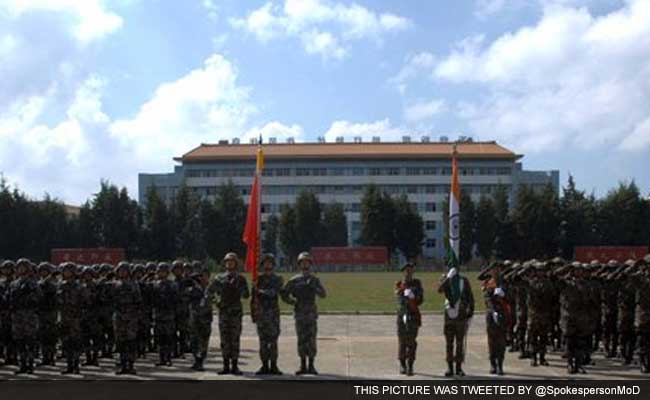 The 10-day exercises codenamed 'Hand-in-Hand' was supervised by a joint delegation of observers from India and China, who expressed satisfaction at the level of assimilation achieved.

Beijing: The fifth round of India-China joint military exercises wound up today in the Chinese city of Kunming with the two countries holding a unique mock exercise depicting counter-terror operations at the Sino-Indian border.

"A joint field exercise depicting counter-terrorist operations on India-China border areas was held from 21 to 22 October to validate the exercise objectives," a statement by Indian Defence Ministry said.

"A series of challenging tactical situations were presented to validate the reactions of the sub-units and a very high-level of professionalism and coordination was seen among troops of both the armies," it said.

A video footage of the drill released by the ministry showed both sides in a combined operation raiding and seizing a terrorist camp.

An exercise featuring troops from both sides at the border was regarded significant considering recent tensions between the two militaries in the Ladakh region, where Indian troops objected to attempts by their Chinese counterparts to claim areas on the Indian side of the Line of Actual Control (LAC). 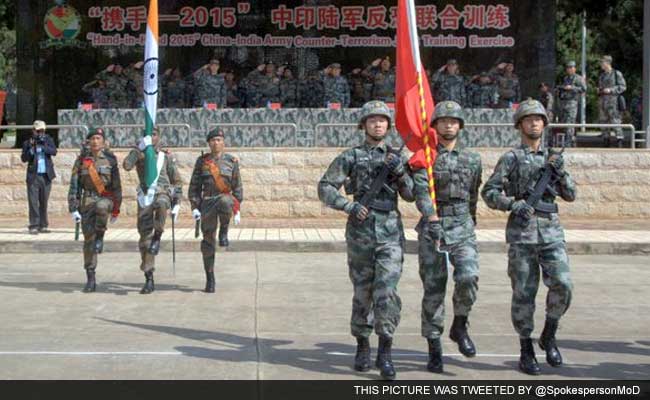 Such issues were discussed at the periodic meetings of Working Mechanism for Consultation and Coordination on India-China Border Affairs (WMCC) including the one held here in the second week of this month.

Referring to the Kunming exercises, the press release said that the joint exercise has "met its stated objectives; to exchange experience on counter-terrorist training and conducting counter-terrorist operations, enhance mutual trust and understanding and promote healthy military relations between the two armies."

Officials say the significant feature of this exercise is that both sides designed special drills, pooling up their anti-terrorism experiences.

While India has been confronting infiltration by terrorists in Kashmir, China is battling the terror menace from East Turkestan Islamic Movement (ETIM) in Xinjiang for the past few years.

India and China have pressed in different contingents each time so that personnel from various commands are exposed to each other.

This year, India pressed in the 2nd Battalion of Naga Regiment from Eastern Command, which patrols the China border, while China deployed troops from the 14 Corps of Chengdu Military Region, which focuses on Indian borders.

The 10-day exercises codenamed 'Hand-in-Hand' was supervised by a joint delegation of observers, who expressed satisfaction at the level of assimilation achieved, said the statement.

The exercises, featuring 175 troops from each side, signed off with an impressive closing ceremony.

Lt Gen AL Chavan, head of the Indian Observer Delegation, said the understanding and goodwill generated during the exercises will strengthen military bonds between the armies.

The drills have helped in understanding each other's organisation and conduct of counter-terrorist operations, he said.

It shows the power to fight terrorism and highlights determination and vision of the two countries to maintain regional security, stability and have a conducive environment for development, he said.

He said that they were impressed by the professionalism and spirit of the Indian contingent.

The troops had trained together and learned from each other in mixed groups on Basic Individual Skills (combat boxing, basic mountaineering and shooting), Comprehensive Combat Skills (obstacle crossing, combat shooting, demolition, high-intensity physical training) and unit/sub-unit tactics, especially in a counter-terrorism scenario.

The heads of observer delegation of both countries reviewed the parade and thereafter awarded certificates and medals to outstanding members of each others contingents.

The Indian contingent will return home by a military aircraft tomorrow.

The next round of exercises will be held in India in 2016.

"Will Put Up Strong Candidate Against Navjot Sidhu": Amarinder Singh