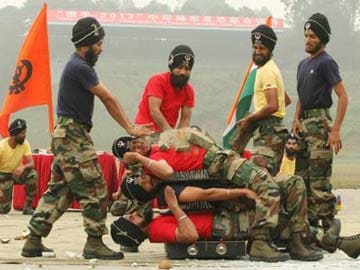 The anti-terrorism drill began on Tuesday in China

Beijing: China and India began a joint anti-terrorism drill on Tuesday, the first such exercise by the Asian powers -- which have a sometimes-fraught relationship -- for five years.

The world's two most populous countries each sent one company of soldiers to Chengdu, in the southwestern Chinese province of Sichuan, for the "Hand-in-Hand 2013" drill, according to Chinese state media reports.

The joint training exercise comes even as the two remain embroiled in a border dispute that has been unresolved for decades and has occasionally led to military standoffs.

In April, India accused Chinese troops of intruding into Indian territory, a row that was only resolved three weeks later when troops from both sides eventually pulled back.

"Since the beginning of this year, China and India relations have scored new progress," he said.

Indian officials told AFP the country's contingent for the 10-day-long drill was 162 strong and led by a brigadier.

Promoted
Listen to the latest songs, only on JioSaavn.com
The first such exercise was held in China in 2007, with another in India the following year.

Beijing blames "terrorist" groups for incidents in its far western region of Xinjiang, home to Muslim Uighurs, and has in the past linked clashes to groups trained in Pakistan, which as well as being India's great rival also shares a border with China.