India-China Clash: The document said ground level interactions were held between the armed forces of both sides to defuse the situation

India-China Standoff: A violent face-off between Indian and Chinese soldiers happened at Galwan in June

China intruded into Indian territory in Eastern Ladakh in early May, the Defence Ministry acknowledged in a document showing on the news section of its website since Tuesday. Two days after it was put up on the Ministry of Defence website, the page is missing.

"Chinese aggression has been increasing along the Line of Actual Control (LAC) and more particularly in Galwan valley since May 5, 2020. The Chinese side has transgressed in the areas of Kungrang Nala, Gogra and north bank of Pangong Tso Lake on May 17-18," the ministry said in the "What's New" section on its website, under the title "Chinese Aggression on LAC".

The document said ground level interactions were held between the armed forces of both sides to defuse the situation. A Corps commanders' flag meeting was held on June 6. "However, a violent face-off incident took place between the two sides on June 15, resulting in casualties on both sides."

Subsequently, said the document, a second corps commander level meeting took place on June 22 to discuss the modalities of de-escalation. "While engagement and dialogue at military and diplomatic level is continuing to arrive at mutually acceptable consensus, the present standoff is likely to be prolonged," the ministry said.

"The situation in Eastern Ladakh arising from unilateral aggression by China continues to be sensitive and requiring close monitoring and prompt action based on the evolving situation," it added.

This morning, the document vanished from the website and the link is not working anymore. A defence ministry spokesperson said the document "did not go through him". 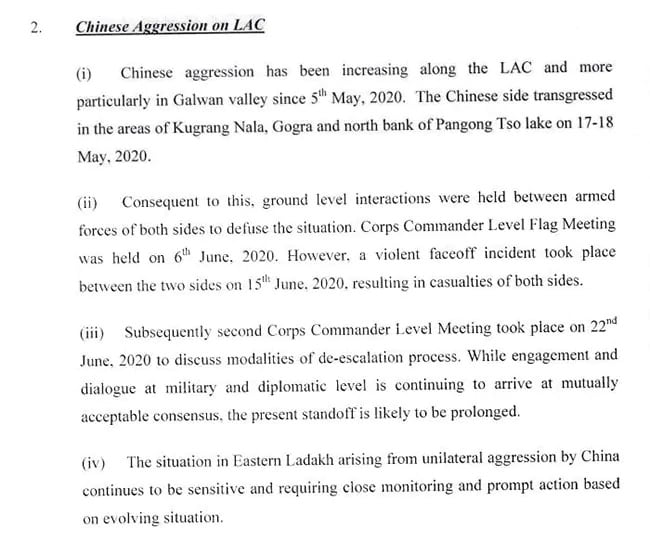 This is the first time any official document had taken note of what was called "Chinese aggression", since tension near the LAC started in May and escalated into the worst fight in decades between the neighbours on June 15, when 20 Indian soldiers were killed in the line of duty.

After the incident, the foreign ministry said the clashes took place because of Chinese attempts to erect structures "just across the LAC" and that Indian soldiers were being stopped from patrolling.

Citing a report on the now deleted document, Congress leader Rahul Gandhi tweeted today: "Why is the PM lying?"

Later, he also commented on the ministry taking off the document. "Forget standing up to China, India's PM lacks the courage even to name them. Denying China is in our territory and removing documents from websites won't change the facts," he tweeted.

At an all-party meeting on the China crisis in June, Prime Minister Narendra Modi's words sparked opposition protests. "Neither has anyone intruded into our territory nor taken over any post. Our forces are doing what they have to do to protect the country, whether it is deployment, action or counter-action. Our patrolling capacity has increased due to newly built infrastructure, especially along LAC," he said.

Later, PM Modi's office clarified that his observations that there was no Chinese presence on our side of the LAC "pertained to the situation as a consequence of the bravery of our armed forces."

India and China have had five rounds of talks over de-escalation after the Galwan valley clash.

China, according to top sources, has not pulled back troops from all the areas that it had intruded into in Ladakh near the LAC in May. China's troops are still present in the Depsang Plains region, Gogra and the Fingers region along the Pangong Lake where India and China had started a mutual disengagement by creating a buffer zone between both sides, India has said.

India has been insisting that China must withdraw its forces from areas between Finger Four and Eight. The mountain spurs in the area are referred to as 'Fingers'.