The defence minister also said India is developing infrastructure in border areas at a "very fast rate", adding China has objected to some of the projects. 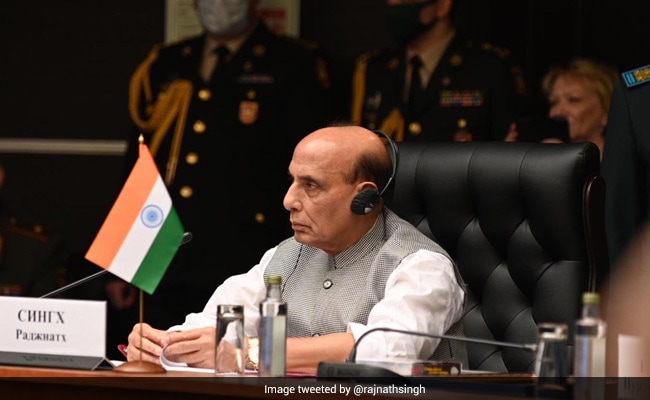 India is developing infrastructure in border areas at a "very fast rate", he said. (File photo)

India will not reduce the number of troops unless China initiates the process, Defence Minister Rajnath Singh said on Friday over the eastern Ladakh standoff, while exuding confidence of finding a solution to the row through talks.

The defence minister also said India is developing infrastructure in border areas at a "very fast rate", adding China has objected to some of the projects.

According to a transcript of the interview issued by the channel, when asked about the dialogue process with China on the row, Mr Singh said, "There is no deadline when it comes to matter like the ongoing standoff. You can't fix a date."

"We are confident of finding a solution through talks," he said.

About a news report that China was constructing a village in Arunachal Pradesh, the defence minister said it was along the border and that such infrastructure has been developed for several years.

"Now, India has also started constructing infrastructure near the LAC at a fast pace considering the requirements of the locals as well as our forces. We are developing our infrastructure at a very fast rate," he said.

When referred to External Affairs Minister S Jaishankar's observation that ties with China is at its lowest point in four decades and asked whether Beijing has broken India's trust, Mr Singh said, "Without a doubt they broke our trust."

Referring to the next round of military talks, he said China recently proposed a dialogue on January 19.

"We received the information a day before the proposed meet, so we asked the Chinese side to reschedule the meet on January 23 or 24. India is always open to dialogue," he said.

Asked about the farmers' protests over three farm laws, Mr Singh said the government has always stressed that there should be clause by clause discussions.

"The government has always said that there should be clause by clause discussions. Wherever the need arises, we will make the amendments. This is what I can recall. But if the farmers want more thorough discussions, the agriculture minister has given them a proposal that the government is ready to put the laws on hold for 18 months.

"In the meantime, we will have discussions and see what amendments are needed. We will decide on this matter," Mr Singh said.