The BJP-led government worked to fulfil the common man's needs and especially targeted the welfare of rural India, farmers, backwards, Dalits and tribals, he said. 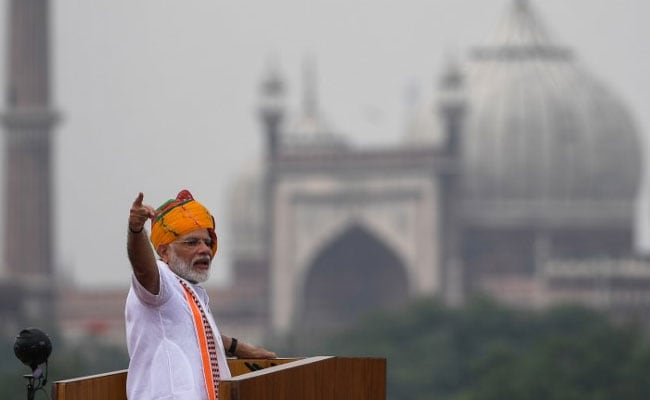 PM Modi said the atmosphere in the country had transformed

The BJP-led NDA government is working to meet people's aspirations in its second term after addressing their needs in the last five years, Prime Minister Narendra Modi said this morning, asserting it has prepared a blueprint for India in the 21st century.

Addressing the nation on its 73rd Independence Day, he cited a number of major decisions, including revocation of Article 370, strengthening anti-terror laws, reforming medical education and legislation against triple talaq, taken by his government since its return to power to emphasize that it is working towards meeting this vision.

Mr Modi said the atmosphere in the country had transformed since he came to power in 2014 as a mood of "hopelessness" had made way for "hope" among the masses who, he added, now believe that India can change for better.

He credited his government's "hard work" for the change, saying in his campaign for the 2014 general campaign he witnessed hopelessness among people as they would wonder if the country can change with a change of government.

The BJP-led government worked to fulfil the common man's needs and especially targeted the welfare of rural India, farmers, backwards, Dalits and tribals, he said.

Mr Modi then added, "But time changes. If the 2014-19 period was about fulfilling people's needs, then the time after 2019 (polls) is about meeting their aspirations and dreams. We have prepared a blueprint keeping in mind how India should be in the 21st century...and are taking steps towards it."

His government worked with the mantra of 'sabka saath, sabka vikas' (With all, for everyone's development) and earned 'sabka vishwas' (everyone's trust) with its performance, he said.

This truth of people will propel his government towards meeting their aspirations in the next five years, he said.

Noting that people's mindset has changed, he said they used to be happy earlier by owning mobile phones but now also want data at a good speed.

While they would be happy with mere announcement of a railway station, they now want Vande Bharat Express (indigenous high-speed train) in their cities, he added.

They are not satisfied with just bus and railway stations and want airports, he said.

Mr Modi also called upon people to think and work collectively for the country's welfare.

In an apparent reference to politics aimed at the welfare of certain castes or communities, he said it used to debated earlier who got what and how much but everybody should now come together to take the country forward.