PM Modi also compared the united opposition to a swamp and said the the lotus (the BJP's election symbol) blossoms in the muck.

Prime Minister Narendra Modi on Saturday targeted the opposition for yesterday's no-confidence motion in parliament, including a shot at Rahul Gandhi's headline-grabbing hug. At a rally in Uttar Pradesh's Shahjahanpur, PM Modi repeated his allegation that opposition leaders were "blinded by lust for power".

"Yesterday in parliament I asked them please tell me the reason for this no-confidence...when they could not give me a reason, woh gale pad gaye (he gave me an unwanted hug)... but could not give a satisfactory explanation," said PM Modi, taking a dig at the Congress chief's now famous act in the Lok Sabha.

The Prime Minister also compared the united opposition to a swamp. "There is not just one 'dal' (political party) but dal over dal resulting in "dal-dal" (swamp) which will only help the 'lotus" bloom." Lotus is the election symbol of the BJP. 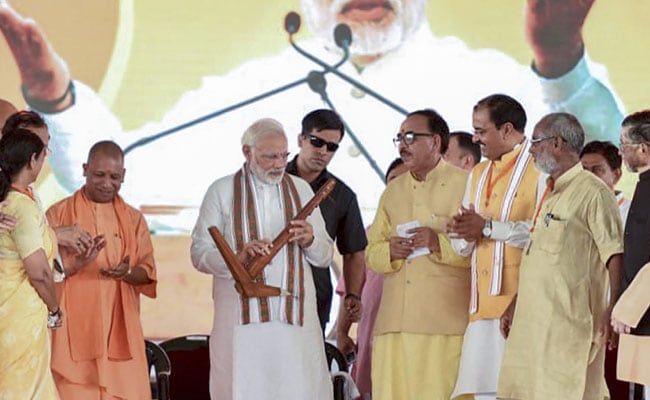 Though PM Modi easily survived the no-confidence vote thanks to his parliamentary majority, a 12-hour debate saw the ruling BJP fend off bitter charges from the Congress and other parties in a warm-up for elections due next year. Rahul Gandhi's hug dominated headlines and opinion columns in newspapers on Saturday.

At his rally on Saturday, PM Modi picked up his attack on the opposition where he left it in the parliament. "We are running to your homes with electricity, they are running towards us in parliament with no-confidence papers...Yesterday in Lok Sabha, I did what I had to do...Are you satisfied?" he asked, as the crowd cheered "haan" (yes).

This was his third visit to the state in less than a month after reaching out to voters in Azamgarh, Mirzapur and Varanasi last week.

Farmers in large numbers from Hardoi, Lakhimpur Kheri, Pilibhit, Sitapur, Bareilly and Badaun were present at Saturday's rally. Shahjahanpur in central UP has one of the biggest farmer mandis or market and is also a prominent cane growing district.

Sugarcane dues were a major factor in BJP's loss in western UP, in the bypolls held in May this year. The Narendra Modi government has announced a huge Rs 8,000-crore package for sugarcane farmers and also recently increased the Minimum Support Price on sugarcane for the coming season.

The sugarcane dues in UP, however, stand at over Rs 10,000 crore at the moment, and the Yogi Adityanath government has not been able to keep its promise of clearing cane dues within two weeks, last year, after he was sworn in as Chief Minister.