Patients On The Bed, Dogs Under It, In A Hospital Ward In UP's Hardoi 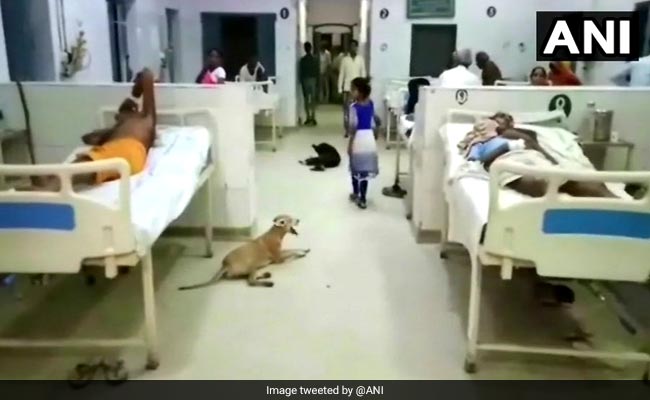 Dogs in a hospital ward in Uttar Pradesh's Hardoi

Hardoi, Uttar Pradesh: Less than a month after dogs were seen feeding on a woman's body in a morgue in Aligarh, stray dogs were caught on camera wandering in a hospital ward in Uttar Pradesh's Hardoi district.

Dogs were spotted in the aisle between rows of beds and under the patients' beds at the main government healthcare facility in Hardoi. "We are scared but if we complain, the staff says why don't you shoo the dogs away yourself," say patients. Some of them often follow the ward boys and nurses the patients claim.

Speaking on stray dogs in the hospital ward, the Chief Medical Officer said, "We've taken cognizance of it and have told staff to not let this happen."

The shocking apathy came to light at a time when there is crisis in Sitapur, around 55 km from Hardoi, over increasing number of stray dog attacks. 14 people have died in the last six months due to stray dog attacks, among them eight this month.

The crumbling healthcare facilities in Uttar Pradesh have been repeatedly exposed in the recent months. On May 23, a pregnant woman was allegedly turned away by a government hospital in Etah. The baby died after she delivered in the toilet at the railway station, assisted by local women. The hospital allegedly refused the woman's admission saying her condition was critical and she should go somewhere else for delivery.

More than 60 children, mostly infants, had died at the BRD Hospital in Gorakhpur in August, 2017. There were allegations that the deaths occurred due to severe disruption in oxygen supply. First Investigation Reports were registered against nine people including the suspended principal of BRD Medical College, Dr Rajiv Mishra and head of anaesthesia department Dr Satish and Dr Kafeel Khan, who was in-charge of the 100-bed ward.

Promoted
Listen to the latest songs, only on JioSaavn.com
The Uttar Pradesh government is planning to construct around 1,000 hospitals with modern facilities in the state. The state health minister Sidharth Nath Singh told the Press Trust of India last month, "We are in the process of identifying two community health centres in each district. Their land, about three acres each, will be given on a long-term lease to private company which will construct a 100-bed hospital, along with an operation theatre and diagnostic centre." The project is likely to take off in November this year.

(With inputs from ANI & PTI)
Comments
Hardoidogs in hospital