Read inOther Languages
This Article is From May 26, 2019

In These Villages, Bride Marries Groom's Sister To "Protect Him"

The male deities of three Gujarat villages were bachelors and in order to show respect to them, the villagers keep the groom at home. 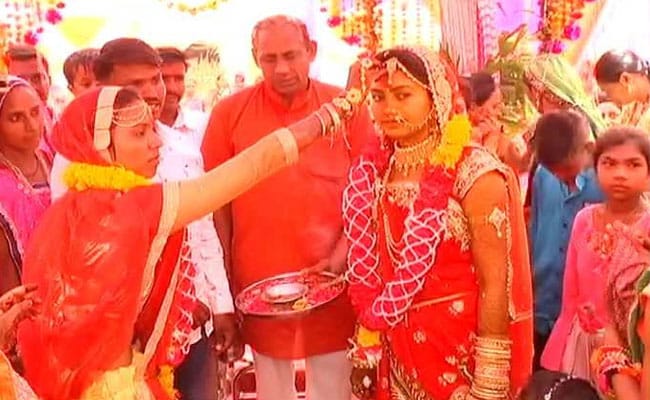 Groom in these Gujarat villages stay at home, while his sister leads the "barat"

Tribals in villages of Surkheda, Sanada and Ambal follow an unusual tradition where marriages take place without the groom's physical presence. Groom's unmarried sister or any unmarried woman from his family represents him in the ceremonies as the groom.

The male deities of these three villages were bachelors and in order to show respect to them, the villagers keep the groom at home, according to the folklore. It is believed this will protect their grooms from any harm.

The groom dresses up in "sherwani", wears a "safa" on his head and carries a traditional sword, but he cannot attend his own wedding, according to this tradition.

The groom is required to stay at home with his mother, while his sister leads the "barat" (wedding procession). The sister marries the bride and gets her home.

"All the rituals that a groom traditionally does is conducted by his sister. She takes the "mangal phere" with the bride instead of her brother," said Kanjibhai Rathwa, a local resident Surkheda village.

Ramsingbhai Rathwa, the village head of Surkedha village in the district said that whenever people disregarded the practice, the unfortunate events befell them. "This practice is followed in three villages. It is believed that if we don't follow this custom then some harm will befall," said Mr Rathwa.

"A couple of times some people have tried not to follow the tradition, either they ended up with broken marriages or other types of problems arose," he said.