In Rajasthan's Tribal Belt, A Party From Gujarat Challenging BJP, Others

Rajasthan will be voting for 199 seats of its 200-member Assembly on December 7. 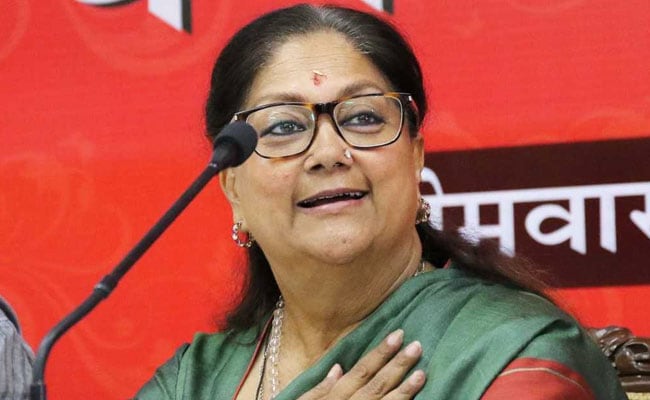 Vasundhara Raje is the Chief Minister face of BJP in Rajasthan. (File)

In south Rajasthan's Vagad region, a party from Gujarat is trying to woo voters banking on the undercurrent in the tribal belt.

The tribal-dominated region, which lies south of the Mewar and shares border with Gujarat and Madhya Pradesh in the south, has seen resentment against both BJP and Congress over the past few years.

Voters here say that none of the two took care of their rights. Banking on this, Gujarat-based Bhartiya Tribal Party or BTP, is reaching out to tribal voters, especially the younger population.

The party has even formed a large network of young men led by senior tribal leaders to canvass every nook and corner of the region. "Proper implementation of schedule five of the Constitution, which deals with scheduled areas, is our main agenda because both BJP and Congress suppressed tribals and have 'snatched' their lands," state chief of the party Velaram Ghoghra told PTI.

Mr Ghoghra is himself contesting from the Dungarpur constituency. Alongside him, the BPT has fielded 10 other candidates. The party is contesting on all four seats in Dungarpur, three of the five seats in Banswara and one seat each in Sirohi, Pratapgarh and Udaipur. Highlighting the "apathy" of tribals, Mr Ghogra said: "They are the custodians of the land but the situation today is that they have to stand along the roadside to seek employment."

He added, "Our people are migrating to other states, we have no local resources, electricity and water is another core issue. Youths are educated but they are unemployed and therefore a kind of unrest is developing. People from outside come and grab the lands of tribal." Ahead of this election, the situation has been such that both Congress and BJP have been putting in extra hours to ensure that seats here don't slip out of their hands.

Prime Minister Narendra Modi and Congress chief Rahul Gandhi have both toured the area. BTP was founded last year ahead of the Gujarat polls by former JDU legislator Chotubhai Vasava. It won two seats in Gujarat elections in alliance with Congress. In Rajasthan, the party has found strong support from students' group Bhil Vidhyarthi Morcha, which has been active in the tribal belt for over the last three years.

In union elections early this year, it won a substantial number of seats in Dungarpur colleges. Mr Ghoghra, an advocate of separate state for local ethnic groups, also said: "After the effective implementation of the scheduled 5, Bhil Pradesh will be our next major demand. We want a separate Bhil Pradesh comprising of tribal belt in Rajasthan, Gujarat and Madhya Pradesh."

There have been apprehensions that unrest among tribals may lead to a situation like in Maoist affected areas of Jharkhand and Chhattisgarh. Intelligence agencies have also expressed concern over certain activities in the region.

"Yes, there were reports about some sensitive activities in the area over the last two-three years. Some people from states like Telangana have held meetings here. We did whatever we could do," state Home Minister Gulab Chand Kataria, who is contesting from Udaipur constituency, said.

He said that as far as BTP is concerned, it will not be able to hamper BJP's poll prospects. "We ensured that people get education and basic amenities in the tribal area. We have associated tribal people with our organisations and they (BTP)will not be able to win." On the other side, Congress state chief Sachin Pilot said that when his party was in power it did enough for the welfare of tribals in the state. "Congress has always focused on the welfare of tribal people. On coming to power, we will address their issues by bringing everyone together," he said.

Rajasthan will be voting for 199 seats of its 200-member Assembly on December 7. Results will be announced on December 11.