In a daring and dramatic rescue operation, a toddler and his mother were saved by an Indian Air Force personnel at Alappuzha in flood-ravaged Kerala on Sunday. Wing Commander Prasanth of IAF's Garud Special Force winched up the little boy from the rooftop of his home in Alappuzha. Reports of IAF, Navy and NDRF personnel saving stranded people in near-impossible rescue operations have been pouring in from Kerala for the last few days.

In Alappuzha, this morning an IAF helicopter hovered over the rooftop of a half submerged house, as the personnel lowered the winch and rescued the baby. He was later reunited with his mother, who was rescued earlier, in the chopper. 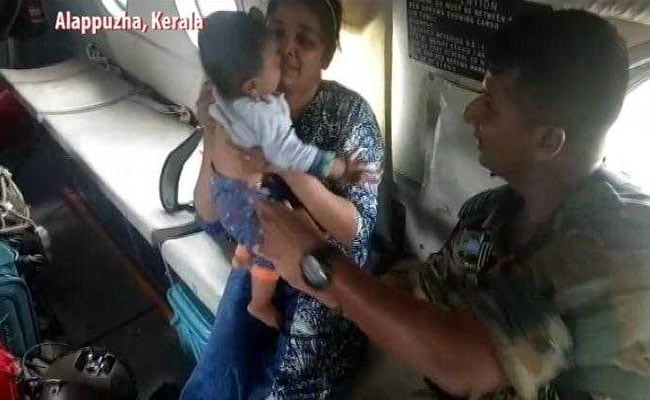 Toddler reunited with his mother in the army chopper in Alappuzha

Earlier in a night-long rescue operation, Coast Guard and army personnel saved a new-born and his mother near the Idukki dam on Friday. The officer who led the rescue team told news agency PTI that the operation began after a call from the Mumbai Coast Guard about rising water level in the Idukki dam area. "We were in the weekly commanders' conference at Kochi, when a call came from the Coast Guard office in Mumbai, to send the best team near the dam, where water was flowing above the danger level," said Lieutenant Colonel Shashikant Waghmode.

Rescue operations are being carried out day and night amid challenging circumstances in difficult terrain as rain lashed the state, leading to poor visibility and landslides. Strong current of the overflowing streams and rivulets are making the job even more difficult and risky for the teams.

Hundreds of rescue teams with more than 90 aircraft and 500 motorboats are engaged in massive relief operations in Kerala. The National Crisis Management Committee (NCMC), met for the third time on Saturday, in as many days and reviewed the relief operations. PK Sinha, the cabinet secretary, held a video conference with the Chief Secretary of Kerala on the status of deployment of rescue teams, motorboats, helicopters, life jackets and distribution of food, water and medicines. Mr Sinha has directed five more choppers of the IAF and navy to be sent to Kerala by today.

The centre has decided to make the naval airstrip at Kochi functional for the operation of commercial flights by Monday. The government is also trying to restore power and communication lines in the flood-hit areas.

President Ram Nath Kovind spoke to the Governor and Kerala Chief Minister and inquired about the flood situation. The President assured the state that entire nation is with them.