Mr Kejriwal had invited Mr Solanki to Delhi during his townhall with sanitation workers in Gujarat recently.

AAP had also welcomed him at the airport to take him to Mr Kejriwal's residence for lunch. Raghav Chadha, AAP's Gujarat co-incharge, was seen greeting Mr Solanki and his family at the airport with folded hands.

"Had never thought this would happen, feels like we are dreaming with our eyes open. I have never met any leader, and today we are going to a Chief Minister's house. We expect AAP to work for the welfare of the Valmiki community in Gujarat," Mr Solanki, accompanied by his mother and younger sister, said. 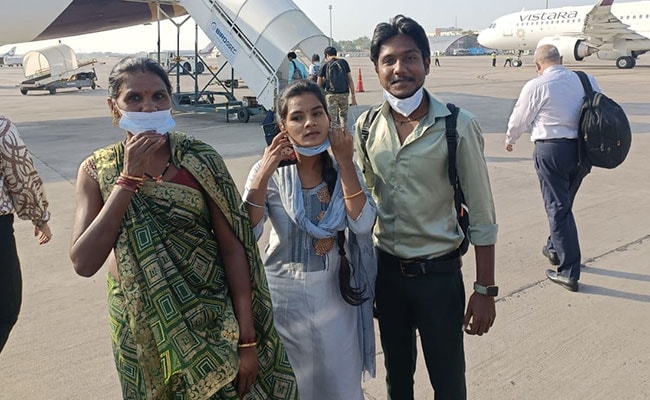 Mr Kejriwal had invited Mr Solanki to Delhi during his townhall with sanitation workers in Gujarat recently. The AAP Convenor will bear the costs. The family will stay in Punjab Bhavan -- embassy of another AAP-ruled state -- on invitation from Punjab Chief Minister Bhagwant Mann, who had also attended the meeting.

Mr Solanki, a civic employee in Ahmedabad, will also be taken to Delhi government schools and hospitals. AAP hopes to showcase it's "Delhi model" of development, which it has promised to replicate in Gujarat.

Welcoming Mr Solanki, Arvind Kejriwal said his family is waiting for him at his home.

"Sir I have a request. The way you came to Gujarat last time and had a meal at the home of an auto-driver, will you come to the home of someone from the Valmiki community and have a meal?" Mr Solanki had said during the townhall.

"Harsh, I will definitely come to your home. But before that, I have a suggestion. Will you accept," Mr Kejriwal said. When Mr Solanki agreed, Mr Kejriwal said, "I have seen ahead of elections, all leaders go to the home of Dalits and have food. But to date, no leader has invited a Dalit to his home. So, will you come to my home for a meal?"

The invitation was accepted with loud cheers and claps from the audience.

Gujarat, where elections are due later this year, is the next big target of AAP, which already rules in Delhi and Punjab.

Student Posted Teacher's Pic With "Boring" Caption. This Happened Next