The tweet also quoted a popular dialogue from his blockbuster movie Baazigar, tweaked to fit the tweet's theme of social distancing. 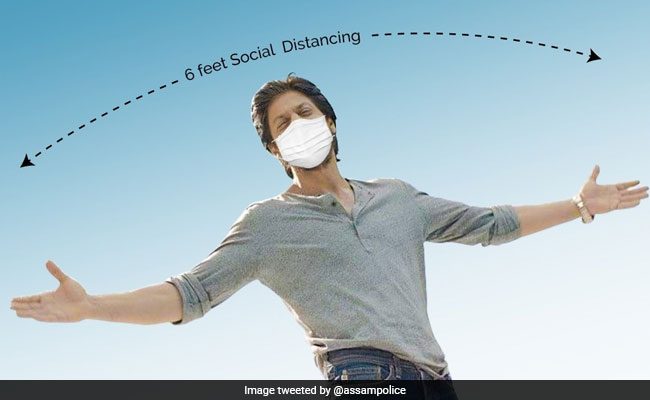 The Assam Police on Saturday took to Twitter to spread awareness about COVID-19, with a filmy twist. The tweet featured Shah Rukh Khan in his signature pose, arms spread wide, with a mask photo-shopped onto his face. It also quoted a popular dialogue from his blockbuster movie Baazigar, tweaked to fit the tweet's theme of social distancing.

The Assam Police used the Bollywood superstar's outstretched arms to drive home the point of maintaining a distance of 6 feet between one another to stem the spread of the highly contagious disease.

This is not the first time that a Shah Rukh Khan meme has been used to spread message on protecting oneself amid the pandemic.

Earlier, the Mumbai police had shared a clip from his movie Main Hoon Na on its Twitter handle, wherein he could be seen doing a bend to escape Satish Shah's saliva expulsion. "@iamsrk wouldn't need to do such stunts any longer - Mask Hai Na!" the tweet read.

Physical distancing and face masks have been considered as important measures to prevent person-to-person transmission of the virus, which has infected over a million people in the country and more than 14 million across the globe.