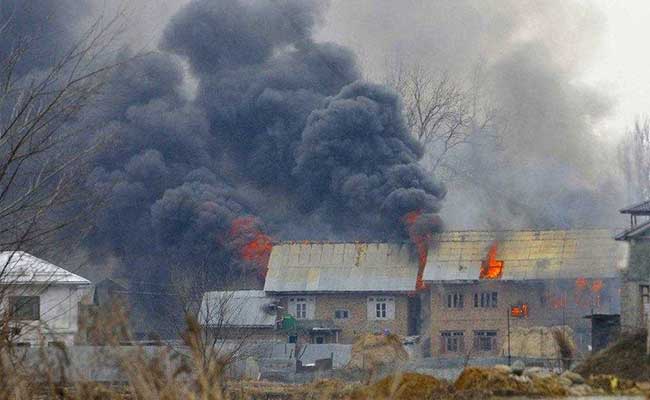 The Congress today presented a list of five questions on last week's terror attack at Jammu and Kashmir's Pulwama and demanded a response from Prime Minister Narendra Modi. The attack on February 14 -- in which 40 CRPF personnel lost their lives when a suicide bomber of Jaish-e Mohammed drove an explosive-laden car into a 78-vehicle convoy --  came two days after the terror group uploaded a video online about a similar one in Afghanistan and warned about one in Kashmir.

Investigators, off the record, have admitted that it was a case of intelligence failure. The Criminal Investigation Department of the state police had shared the video with the intelligence agencies but no action had been taken, sources had said.

The Congress questioned why Prime Minister Narendra Modi and the National Security Advisor Ajit Doval have not accepted their responsibility for this massive intelligence failure. It also asked why the government ignored the threatening video released by Jaish-e Mohammed.

The party questioned where local terrorist Adil Ahmed Dar and his accomplices managed to get hold of the enormous quantity of RDX used to cause the blast, and how the vehicle reached the convoy despite tight security.

RDX - an explosive that terrorists so far sourced from Pakistan -- has not been used in terror strikes in the country for nearly a decade. Investigators said the car that caused the explosion was carrying at least 20 kg of RDX. There have been no answers on how the RDX-filled car managed to reach the convoy despite the sanitised route and the presence of CRPF patrols.

The Congress also questioned why the home ministry rejected the request of CRPF and the Border Security Forces' request for moving paramilitary convoys by air. The subject has triggered much debate after reports that the home ministry had shot down a proposal to move the troops by air.

Shifting the 2,500 men who were on the convoy to Srinagar had been delayed as the Jammu-Srinagar highway was blocked due to snow.

After the attack, the ministry said shifting of paramilitary convoys would continue by road due to logistical reasons, but certain changes have been made in the procedure to strengthen security.

The Congress also questioned why 488 soldiers lost their lives under the Narendra Modi government and why demonetisation has not managed to curb terror. The overnight scrapping of high denomination bank notes in November 2016 was aimed at stopping terror funding that is carried out through a shadow economy of counterfeit notes.

Hitting out at the Congress, Union minister Ravi Shankar Prasad said when the whole world is standing with India, the Congress party is "busy questioning". Accusing the party of mud-slinging against the Prime Minister, he said, "Are we making issues of a video of Rahul Gandhi circulating where he is seen doing something on his phone?"

The Congress, he contended, was "upset because security for some people have been withdrawn". After the Pulwama attack, the government has withdrawn security of separatist leaders in Jammu and Kashmir.

The Congress attack came a week after the terror strike in Jammu and Kashmir. The party had suspended all political activity after the attack, saying it was time to support the affected families and show solidarity with the government.

The Congress also said PM Modi was shooting a film with the National Geographic channel at the Corbett Park when the attack took place. But instead of returning immediately, he continued with the shoot and even went for a boat ride, the party alleged.