Eleven people drowned in the Chhota Talab near the Khatalpura Ghat in Bhopal at around 4:30 am on Friday, during a Ganesh idol immersion. 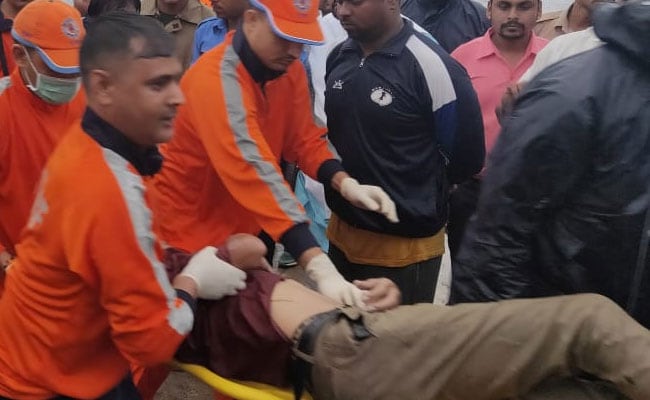 A magisterial inquiry has been ordered into the incident in Bhopal.

For residents of a slum in Bhopal's Piplani area, the 10-day long Ganesh Chaturthi festival ended with an irreparable tragedy in the early hours of Friday - the drowning of its 11 young men during the idol immersion. And yet, despite widespread anger over the incident, the only people charged so far are two boatmen who were even involved in the rescue efforts.

Eleven young men from a single neighbourhood, aged between 15 and 30 years, which included 15-year-old Parvez Khan, who has actively involved in the Ganapati festival of the locality for the last four years, and 16-year-old Karan, drowned in the Chhota Talab or Lower Lake near the Khatalpura Ghat - close to the Madhya Pradesh state police headquarters at around 4:30 am.

About eight others who were part of the same immersion procession, either managed to swim to safety or were saved from drowning by boatmen and others present there.

Later, 11 bodies were fished out of the swollen lake by the National Disaster Response Force or NDRF and State Disaster Emergency Response Force or SDERF teams which arrived almost 15-30 minutes later, even though the senior police officials claimed that rescue operations began immediately.

While senior administrative and police officials largely remained tight-lipped about the matter, saying that a magisterial probe will reveal the reasons and those responsible for the incident, a 4:18 minute video of the incident which went viral on Friday, showed what actually happened.

The video showed how after the giant Ganesha idol was pushed into the lower lake from two joined boats, one boat tipped over. While about five people were seen either swimming to safety or being saved by boatmen on other boats, no home guard, policemen, rescue workers are seen in the video coming to the rescue of the drowning young men, despite one of them shouting, "Arey bhai jaldi aa jao yaar (Please rush here)."

The police have charged two boatmen Akash and Changu Batham for negligence. The collector has also suspended revenue official Anil Gavhane for negligence in duty.

But the opposition has questioned the move by police. Krishna Gaur, the BJP MLA from Govindpura seat, questioned why the boatmen who saved some of the drowning young men were charged and detained.

"Instead, the district and police officials, who failed to ensure arrangements for safe idol immersion and act in time to save the youngsters from drowning should have been booked and arrested," she said.

Questions are also being asked as to why the idol immersion was allowed in the swollen lake at around 4:30 am; where were senior district and police officials when it took place; why weren't the boatmen stopped from joining two small boats to carry the heavy and tall idol; why did the on-duty officers of different departments present on the spot fail to check overcrowding of the small boat; why were safety equipment, like life jackets not provided to the young men on the boat; where were home guards, rescue workers, local police and deep divers when the incident took place very close to state police headquarters.

A similar tragedy had happened in the same lower lake in Bhopal in March 2016, when five men died in the accident.