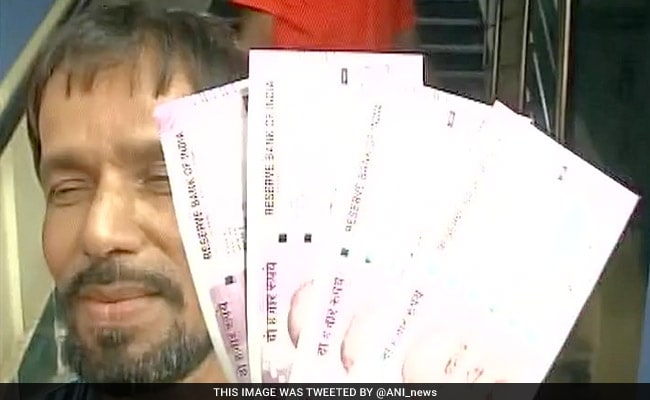 Some people in West Bengal were seen clicking selfies with the new Rs 2,000 notes.

Kolkata: Notwithstanding waiting in a long queue outside the banks since early morning, people in many parts of West Bengal were seen taking selfie with the new Rs 2,000 currency notes even as others complained of the hardships they faced to exchange the now-invalid currency notes of Rs 500 and Rs 1,000.

In Beliaghata area in the state capital, many stood in long queue in front of a nationalised bank to exchange old currency notes of Rs 1,000 and Rs 500 besides depositing and withdrawing money.

On the rush for depositing and withdrawing money, a person, who had been waiting in the queue since 8 am, said there were apprehensions that there might not be adequate supply of new notes, which was refuted by bank authorities.

Bank officials said it would take some time to complete formalities for exchanging money but assured that there is adequate supply of notes.

Amid a large number of people thronging the banks, some suggested that the banks should have given tokens to save time.

"In that case we would not have to stand in queue for long, we could have done other works. Then there are old people also in the queue," said a person who had been waiting in the queue since early morning.

Promoted
Listen to the latest songs, only on JioSaavn.com
There was an incident of minor scuffle in front of a bank in Howrah over entering the bank premises.

Banks have been asked to be open on weekends including Sunday to deal with the situation. The ATMs will resume functioning from tomorrow but there is a limit of withdrawal of Rs 2,000 per day which is expected to be increased in coming week.