In a $100 million move to counter China, India to upgrade Iran's Chabahar port 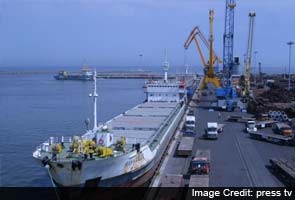 Tehran: In a strategically significant move to counter China's presence in the region, India has announced that it will upgrade Iran's crucial Chabahar port that gives a transit route to land-locked Afghanistan.

India's decision was conveyed by Foreign Minister Salman Khurshid in Tehran today during his meeting with his counterpart.

The move comes despite strong pressure from America, which doesn't want any investment in developing infrastructure in Iran to put pressure on the Western Asian country over its covert nuclear programme. But India has been worried and keen to open alternative route to Afghanistan ever since China took over Pakistan's Gwadar port in the region, which is just 76 km from the Chabahar port.

Chahbahar port, which is surrounded by a free trade zone, is crucial particularly since Pakistan does not allow transit facility from India to Afghanistan.

India will also discuss ways to increase trade with Iran as it is concerned over the "grave" imbalance. The two-way trade is around US $15 billion, out of which Indian exports account only for around US $2.5 billion.

Oil is the biggest item of Indian import from Iran but India feels there is a lot of scope for increasing Indian exports to the Persian country particularly in pharmaceuticals and food.

However, efforts to enhance trade have been facing hurdles because of sanctions imposed by the UN and European Union, which make payment difficult.

Promoted
Listen to the latest songs, only on JioSaavn.com
There are also problems like re-insurance of oil refineries and transportation of consignment from Iran because of the sanctions.