Imran Khan said that if the next Indian government were led by the opposition Congress party, it might be too scared to seek a settlement with Pakistan over Kashmir, fearing a backlash 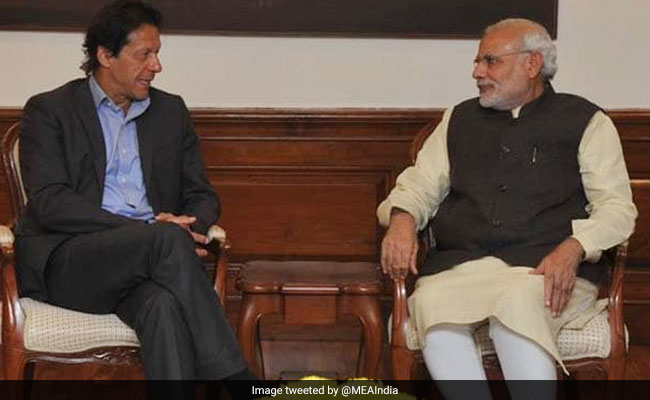 Relations between Pak and India reached a crisis point in February after a suicide bombing in Pulwama.

Pakistan Prime Minister Imran Khan said he thinks there may be a better chance of peace talks with India if PM Narendra Modi's BJP wins the general election due to begin on Thursday.

Imran Khan said that if the next Indian government were led by the opposition Congress party, it might be too scared to seek a settlement with Pakistan over Kashmir, fearing a backlash.

"Perhaps if the BJP - a right-wing party - wins, some kind of settlement in Kashmir could be reached," Imran Khan told a small group of foreign journalists in an interview.

This was despite the massive alienation that Muslims in Kashmir and Muslims in general were facing in India, said Imran Khan, who took office last August.

"I never thought I would see what is happening in India right now," said the former international cricket star. "Muslim-ness is being attacked."

He said PM Modi, like Israeli Prime Minister Benjamin Netanyahu, was electioneering based on "fear and nationalist feeling".

Imran Khan did appear to offer India an olive branch, saying that Islamabad was determined to dismantle all Pakistan-based terror groups in the country, and that the government had full support from Pakistan's powerful army for the programme. Those to be dismantled include groups involved in Kashmir.

Imran Khan said Kashmir was a political struggle and there was no military solution, adding that Kashmiris suffered if armed terrorists from Pakistan came across the border, leading to Indian Army crackdowns.

Relations between Pakistan and India reached a crisis point in February after a suicide bombing killed 40 soldiers in Pulwama in Jammu and Kashmir.

Islamabad denied responsibility for the February 14 attack, which was claimed by Pakistan-based terrorist group Jaish-e-Mohammed, but the bombing prompted India to carry out a cross border air strike against a terrorist training camp in Pakistan.

Pakistan responded the next day by sending planes to target Indian military installations.

Pollsters say PM Modi and the BJP's re-election bid got a boost from a wave of patriotism after the suicide bomb attack and the Indian government's fast response.

Imran Khan said there was still the possibility if the polls turn against PM Modi in the next few weeks that India could take some further military action against Pakistan.

The general elections will be held in seven phases and will begin on Thursday. The result will be counted on May 23.

Imran Khan said that it was vital for Pakistan to have peace with its neighbours, Afghanistan, India and Iran, if it was to have the kind of economy needed to pull 100 million people out of poverty.