Inside a Gorkha rifles band of the Indian army tried to get people in the mood, including the patriotic "Saare jahan se achcha Hindustan hamara". 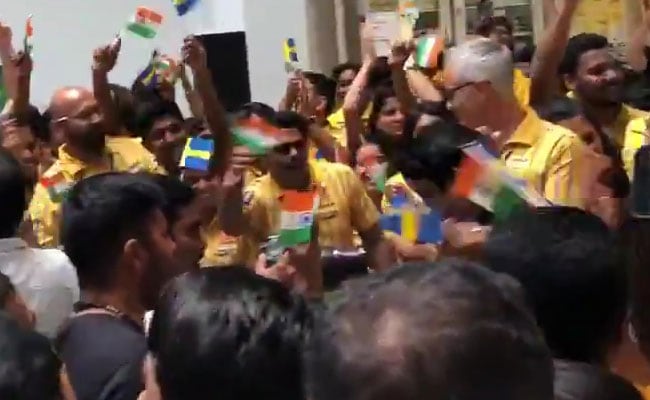 Ikea staff members packed themselves at the stairway, waving India and Sweden flags.

Ikea's first Indian outlet opened on Thursday, with more than 200 eager shoppers queueing in the underground car park to escape the heat as a military band played a crowd-pleasing medley inside.

The store in the southern city of Hyderabad is the first of 25 outlets the Swedish furniture giant hopes to open by 2025 across the country of 1.25 billion people.

"I've come all the way from Bangalore (575 kilometres, 357 miles away). I am excited to see what's there," garment factory employee Krishna Mohan Dixit, 39, who began lining up 90 minutes before the 10 am opening, told AFP.

"We are looking forward to it. Actually it's my wife who got me here. Her sister sends a lot Ikea stuff from Dubai. So here we are," said IT manager Nasrullah Khan, 34, another early bird.

When the doors opened the customers rushed in through the lobby onto the escalator leading to the first floor.

They were greeted by Ikea staff members in blue-and-yellow company polo shirts who had packed themselves at the stairway, waving India and Sweden flags.

Inside a Gorkha rifles band of the Indian army tried to get people in the mood, including the patriotic "Saare jahan se achcha Hindustan hamara" ("Our India is better than the rest").

The occasion was graced by number of dignitaries including Sweden's ambassador to India, Klas Molin, and KT Rama Rao, the IT minister of the state of Telangana.

Ikea, famous for its self-assembly products, faces a tough challenge in India where people are not used to having to put together assemble furniture themselves, analysts say.

Ikea has tweaked its offerings to suit Indian tastes, starting with the restaurant where its famous meatballs will be chicken or vegetarian instead of the usual beef and pork.

There are also more than 1,000 products under 200 rupees ($2.92) to satisfy consumers whom John Achillea, store manager, says have "big aspirations for their homes and small wallets". A six-piece bowl set with cutlery for kids costs 131 rupees, for example.