PM Narendra Modi in IIT Madras: The ceremony also broke another convocation protocol - the crowd chanted as Prime Minister Modi walked in, in a scene reminiscent of the rock star welcome at the lavish 'Howdy, Modi!' event in the US last week 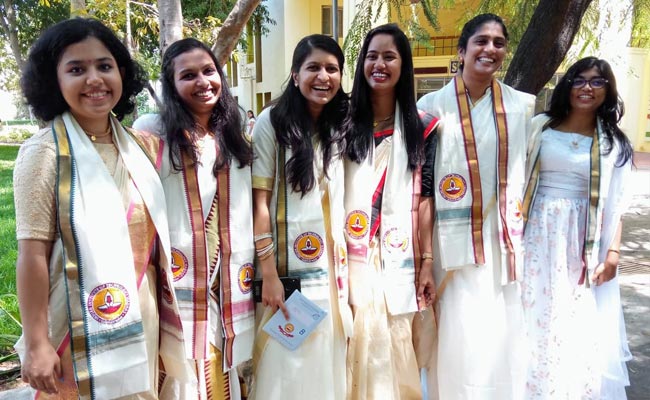 A long-standing tradition was changed at the 56th annual convocation ceremony of IIT Madras on Monday, with the institute prescribing Indian attire for graduating students and research scholars instead of the distinctive gowns worn worldwide. Graduates, post-graduates and research scholars were directed to come in white (or off-white) shirts or short kurtas with similarly-coloured dhotis, pyjamas or pants. Women students and scholars were told to wear either a salwar kameez or a saree, in the same colours.

Both were also directed to wear a traditional shawl (called angavasthiram) that the institute supplied for Rs 350, the students said.

Prime Minister Narendra Modi, who made his first visit to Tamil Nadu since his BJP stormed to power in national elections in May, was similarly attired when he delivered the convocation address. The members of the Senate and the Chief Guest also switched to white robes.

Some graduates were happy about the change.

"I love the Indian attire. It was a new experience as already I had experienced wearing western robes for my B Tech convocation earlier," a graduating M tech student from Andhra Pradesh told NDTV.

However, some others expressed mixed reactions.

"I was actually looking forward to the long traditional robe with cap to take a picture," a young woman alumnus from Kerala said, adding, "This looks like a staged change to please the central government pushing a particular ideology".

The change in tradition was in-line with a policy change championed by PM Modi's government that emphasises the revival of handloom industries. 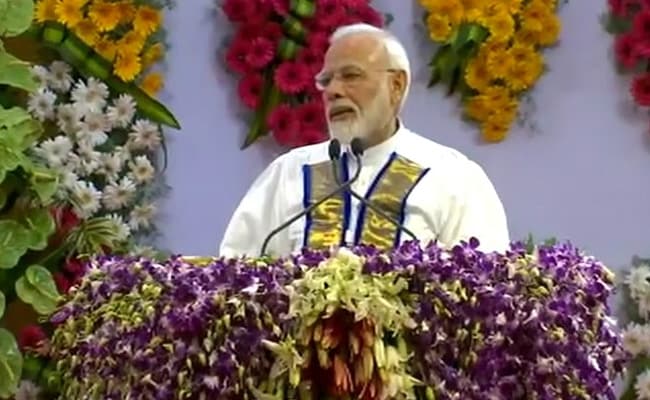 In June the University Grants Commission (UGC) requested universities to “consider using handloom fabric for ceremonial dress for special occasions like convocation”. The notification was identical to one issued in 2015, at the start of PM Modi's first term.

Last year, IITs in Roorkee, Bombay and Kanpur asked students to wear Indian outfits instead of Western ones.

Meanwhile, the ceremony at IIT Madras on Monday also broke another convocation protocol – the assembled crowd chanted as the Prime Minister, in a scene reminiscent of the rock star welcome he received at the lavish ‘Howdy, Modi!” event in the United States last week.

Mr Shah's remark, made on Hindi Diwas, drew sharp reactions from regional leaders who saw it as an attempt to impose the language on non-Hindi speaking states, with Leader of Opposition and DMK chief MK Stalin declaring "This is India, not Hindia".

Although Mr Shah later clarified his comment and made a U-turn, #GoBackModi emerged as a top trend on Twitter during the PM's visit.

The Prime Minister, who made several complimentary references to the Tamil language and India's linguistic diversity last week - at both Houston and the UN General Assembly in New York City - attempted to further assuage feelings in Chennai by complimenting a traditional South Indian breakfast of idly, dosa, sambar and vada.