'If Women Can Drive PM Modi to The Sea, Will Congratulate Them': Mani Shankar Aiyar 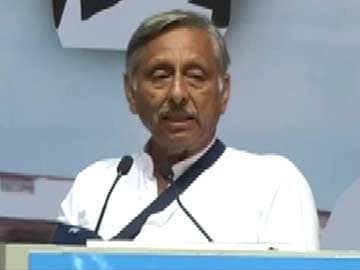 The ruling BJP retorted immediately that the Congress was "drowning in the sea" because of Mr Aiyar and his "tea-vendor" barb at Mr Modi before the national election.

"Women who have proved that they can work for the public...if we bring them into the Congress, then Modi-ji will be forced to return to Gandhinagar tomorrow. Aur agar aapne aage samundra tak pahuncha diya to aapko bahut bahut Mubarak (And if you can drive him to the sea then congratulations to you!)," Mr Aiyar said, addressing a gathering of Congress women workers this morning.

BJP spokesperson Shahnawaz Hussain shot back, "It is because of Mani Shankar Aiyar that the Congress is drowning in the sea. It was his pathetic 'chaiwallah' comment that helped a person from a poor family become Prime Minister."

He challenged, "Let us see the results of the elections in four states. We will know where the Congress stands."

Promoted
Listen to the latest songs, only on JioSaavn.com
The 74-year-old outspoken Congress veteran had been widely criticized for his jibe at Mr Modi's tea seller past during a Congress conclave in February, in the middle of a heated election campaign. He had said "There is no way (Mr Modi) can be Prime Minister in the 21st century... but if he wants to come and distribute tea here we can make some room for him (at the conclave)".

Mr Modi took charge as Prime Minister in May after leading his party to a stunning and decisive victory. During his rallies, the 63-year-old had reached out to the masses by sharing how he sold tea on trains as a boy. Driving home the point, the BJP also launched a series of "Chai Pe Charcha" meetings in which Mr Modi addressed different sections of the population.
Comments
Mani Shankar AiyarNarendra Modi