Congress leader Rahul Gandhi tweeted in Hindi that the "EC's car has broken down, the BJP's intentions are bad and the condition of democracy has worsened". 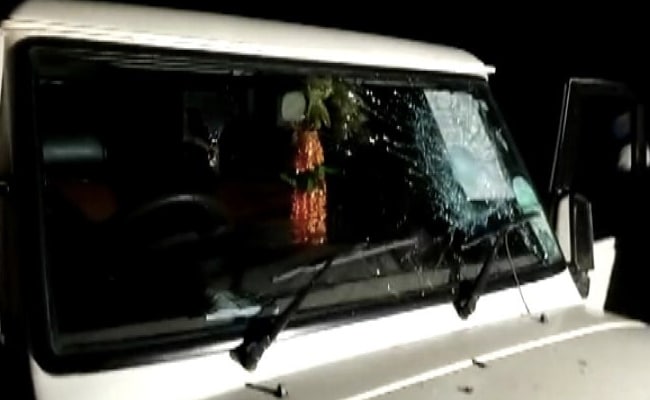 The Congress on Friday questioned the Election Commission (EC) after a BJP candidate's vehicle was found transporting a polled EVM in Assam's Karimganj district and said if the poll body does not wake up now and remains "complicit", it will be fatal for democracy.

Violence broke out in Karimganj district on Thursday night after a mob spotted a BJP candidate's vehicle being used to transport a polled EVM to the strong room, forcing the police to fire in the air to bring the situation under control.

The EC suspended four poll officials and ordered a repolling at the booth as a video went viral on social media.

Congress leader Rahul Gandhi took a swipe at the Election Commission, tweeting in Hindi that the "EC's car has broken down, the BJP's intentions are bad and the condition of democracy has worsened".

Congress general secretary and chief spokesperson Randeep Surjewala said that the "EVM fraud" was for everyone to see and asked whether the EC needed the BJP's help to carry EVMs.

"EVM fraud is for everyone to see. EVMs found in the car of BJP MLA candidate Krishnendu Paul after the second phase of polling in Assam. Does the ECI need the BJP to carry the EVM's?

"If the ECI doesn't wake up even now and remains mute or complicit, it is fatal for democracy," he said on Twitter.

Mr Surjewala alleged that the BJP was staring at a decisive defeat in the Assam Assembly elections and it has "panicked immeasurably".

"The last desperate measure is always EVM theft. Will the ECI reply - Why were EVM recovered from BJP candidate Krishnendu Paul's car? Why were EVM found in the boot of a luxury car near Hatipura polling station in Diphu in Assam," he asked.

He posed several questions to the ECI, asking why were the officials carrying the EVM in Jamunukh without any security official accompanying them, in violation of the ECI mandate, and whether the voters in Kalaigaon complained of EVM disappearing from the booth.

"What enquiry was held? What action was taken," he asked in a series of tweets.

"Will the ECI reply - Whether some suspicious officials were found inside the strongroom in Dibrugarh, where EVM are kept? What action was taken," he asked.

Randeep Surjewala also asked whether 139 polling stations faced serious EVM malfunctioning in the second phase, including in Jagiroad, Nagaon, Hojai, Nilbagan, Lumding, and sought to know what action has been taken.

Congress general secretary Priyanka Gandhi Vadra said the Election Commission needs to start acting decisively on reports of private vehicles transporting electronic voting machines, and a serious re-evaluation of the use of EVMs needs to be carried out by all national parties.

Tagging a tweet which carried a video showing EVMs in the car of a BJP candidate in Assam, she said every time there was an election, videos of private vehicles caught transporting EVMs showed up.

"Unsurprisingly they have the following things in common: The vehicles usually belong to BJP candidates or their associates. The videos are taken as one off incidents and dismissed as aberrations. The BJP uses its media machinery to accuse those who exposed the videos as sore losers," she said.

She alleged that too many such incidents are being reported and nothing is being done about them.

"The EC needs to start acting decisively on these complaints and a serious re-evaluation of the use of EVMs needs to be carried out by all national parties," she said in a series of tweets.

Congress leader Rajeev Shukla said that with such incidents happening again and again, the EC needs to restore the confidence of people in elections and the safety of EVMs. He said the incident is of serious nature and must be probed thoroughly.

The incident snowballed into a huge controversy with the opposition Congress and AIUDF alleging that the EVM was being "stolen", while the Election Commission suspended four poll officials and ordered a repoll at the booth.

The vehicle of the polling party of the 149-Indira MV School in the Ratabari constituency broke down on their way to the strong room in Karimganj town, officials said.

"They took a lift on a private vehicle. Incidentally, the vehicle was registered under the name of the wife of the sitting BJP MLA from Patharkandi Krishnendu Paul. When it reached the Nimal Bazaar area, some public spotted it," a official of the district administration said.