'I have a Dream,' Prime Minister Modi Confides to Audience in Madison Square Garden 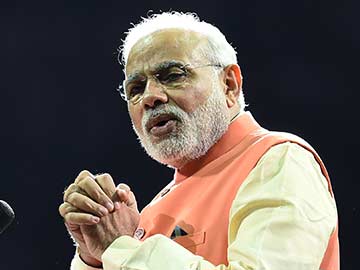 "I am a small man, so I focus on small things," Prime Minister Narendra Modi said.

New Delhi: Prime Minister Narendra Modi has a dream - housing for every Indian before a decade is over.

On American soil, in a nod to civil rights movement leader Martin Luther King, PM Modi said, "I have a dream... by 2022, there should be no one in India without a roof over his head."

The year 2022 is important for India, the PM reminded his audience - the Indian diaspora at New York's Madison Square Garden. "It will be 75 years of our Independence, an important landmark in Indian culture".

The Prime Minister confided that he had another cherished goal as well - providing a clean India to Mahatma Gandhi by 2019, the 150th birth anniversary of the Father of the Nation.

"Two things were dear to Gandhiji - India's freedom and cleanliness. Is it not our responsibility to pay a tribute to him by cleaning our country?" the Prime Minister said.(Read: 'Gandhi Was An NRI Like You': PM Narendra Modi At Madison Square Garden)

Promoted
Listen to the latest songs, only on JioSaavn.com
Almost as an aside regarding his passion for a clean India - which finds mention in almost every speech - the Prime Minister said, "I've decided to build toilets. People tell me I have a grand vision, I tell them I began by selling tea. I am a small man, so I focus on small things."

More than 30,000 people across the US had registered for free tickets for today's event. Those who failed to get a ticket, milled around Times Square watching the programme on giant television screens.