More than 72 people were killed in the incident when a huge mass of rock and snow broke from a left valley of Raunthi Gad, crashing down in the Rishiganga valley and triggering a deadly flood in the Rishiganga river. 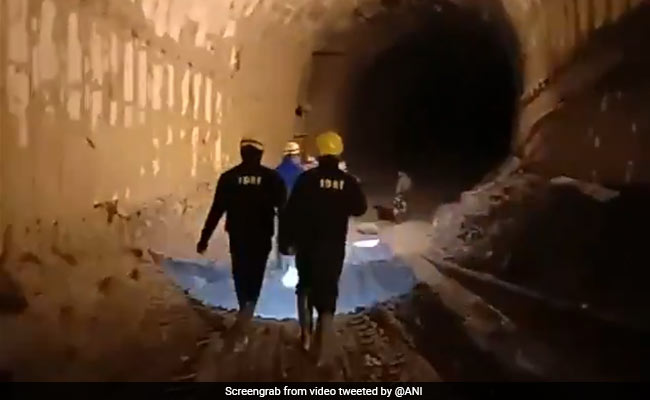 January 2021 was the warmest January on record in Uttarakhand in six decades, the report states. (File)

A huge mass of rock and snow broke from a left valley of Raunthi Gad, crashing down in the Rishiganga valley and triggering a deadly flood in the Rishiganga river that wiped out a hydel power plant in Uttarakhand's Chamoli district in February, a report by the Geological Survey of India (GSI) has said.

According to Saibal Ghosh, Director, Geo-hazard Research and Management (GHRM) Centre, GSI Central Headquarters, the event was initiated by a "snow/ice/rock" mass avalanche, along with a portion of jointed rock mass having an approximate dimension of 400m x 700m x 150m, from the left valley wall of Raunthi Gad (a left-bank tributary of the Rishiganga river).

"The dislodged rock or ice constituting from the avalanche crashed to the Raunthi Gad valley floor after travelling about 2,900 metre with a vertical fall of around 1,800 metre."

"The energy of impact at a very high speed has pulverised the snow/ice/rock, besides generating melt water, and the entire dislodged material of snow/ice/rock has rapidly flown in the downstream of Raunthi Gad and further down the slope along the Rishiganga valley, causing this huge deluge and impacts to the elements-at-risks exposed across its path, including the formation of a temporary lake on the Rishiganga river just immediately upstream of the confluence with Raunthi Gad," Mr Ghosh was quoted as saying in a statement.

He pointed out that changes were also observed in the hydro-meteorological conditions between February 4 and February 6 (heavy snowfall followed by sudden warmer climate), which possibly triggered this huge snow and rock avalanche or a landslide, causing a sudden domino effect of flash flood downstream.

January 2021 was the warmest January on record in Uttarakhand in six decades, the report states.

The debris from the river wiped out the 13.2-MW Rishiganga Hydel Project near Raini and the barrage site at the under-construction Tapovan-Vishnugarh Hydel Project (520 MW) of the National Thermal Power Corporation (NTPC) at Tapovan was severely damaged by the debris-laden flood water.

However, no major damage has been noticed further downstream of Joshimath, but the fury of the flash flood reached down to the Srinagar reservoir site in Rudraprayag district.

More than 72 people were killed the incident and several are still missing.

Vulnerability of the open joints in rock mass in the high-altitude areas, where freeze and thaw actions are prevalent, and the areas that face risks posed by smaller mountain glaciers or glacierets are also becoming important locations where such type of hazard can be initiated, the report said.

The steep higher order streams and the narrow river valleys in the high-altitude areas of the Himalayas remain extremely hazard prone, which are not only vulnerable to Glacial Lake Outburst Flood (GLOF) or Landslide Lake Outburst Flood (LLOF) hazards, but have also become locale for a major disaster caused due to the domino effect of a large or mega landslide or avalanche, it added.

Immediately after the disaster, the GSI, the 171-year-old premier geo-scientific organisation of the country, constituted a team of experts to find out the causes leading to the disaster.

According to Satya Prakash Shukla, DDG, International Affairs Division, GSI Central Headquarters and the leader of the team of geoscientists who conducted the first-hand study of the disaster site, "Multiple lessons have been learnt from this event of February 7, which is an excellent but cruel example of multi-hazard phenomena that occurred during the winter time, when this type of a phenomenon leading to such a disastrous deluge is the least expected in the Himalayas."

Apparently, no ground evidence has so far been observed favouring the occurrence of a GLOF causing this event, the report said.

An artificial dam was formed near the confluence of Raunthi Gad and the Rishiganga river by the flowing debris, which blocked the flow of the river and formed a small lake, temporarily posing another domino effect.

A study conducted by the Wadia Institute of Himalayan Geology has also pointed to similar findings.

A study by the National Remote Sensing Centre of the Indian Space Research Organisation (ISRO) has indicated that the time taken from the initiation of the avalanche and its disastrous impact up to the Tapovan barrage site near Joshimath was barely 50 minutes, which indicates the availability of a very low lead time for raising any warning for the downstream areas.