Massive protest marches are being held in Ladakh, demanding full statehood and recognition under the 6th Schedule of the Constitution for the region that was carved out as a separate Union Territory in August 2019.

Protests are being organised by the Leh Apex Body, an amalgam of all political and social organisations.

Hundreds of people marched in Leh, shouting slogans demanding statehood, constitutional safeguards and separate parliament seats for Leh and Kargil districts. "We seek our rights. We are not begging," the protesters said, raising slogans.

Similar protests are being held by the Kargil Democratic Alliance in Kargil district. 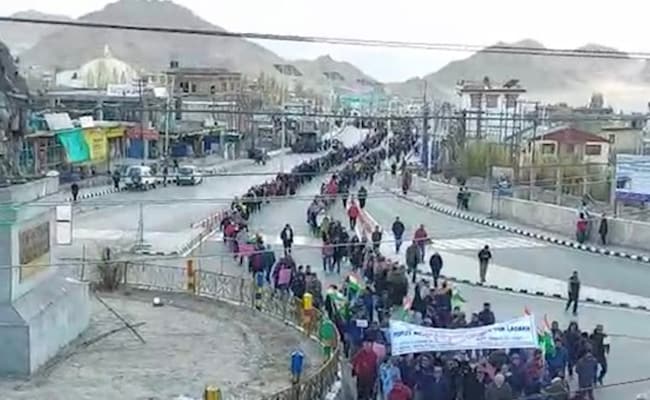 Protests are being organised in Ladakh by the Leh Apex Body, an amalgam of all political and social organisations

The Leh and Kargil Democratic Alliances have formed an alliance to demand statehood for Ladakh.

Ironically, on August 5, 2019, when Jammu and Kashmir was stripped of its statehood and downgraded into two Union Territories, there were celebrations in Leh. The Ladakh Buddhist Association, which was part of the celebrations then, is now part of the political alliance demanding statehood and constitutional guarantees for jobs and land rights exclusively for the people of Ladakh.

Initially, the BJP unit in Ladakh was part of the alliance, but later pulled out as the party came under criticism for its doublespeak.

This is also the first time when Muslim-majority Kargil and Buddhist-dominated Leh have joined hands for their political future.

The move is a major challenge for the central government amid a protracted military standoff along the Line of Actual Control in Ladakh. The centre and the BJP have touted carving out Ladakh as a separate Union Territory a historic move that will bring development and also end decades of discrimination against the region.

However, within just two years, people in Leh and Kargil felt politically dispossessed and have jointly risen against the centre.

For the last one year, they have held multiple protests, demanding an end to bureaucratic rule in the Union Territory.

He, however, spoke about holding assembly elections in Jammu and Kashmir after the completion of revision of electoral rolls.

However, even before the centre takes a call on restoration of statehood for Jammu and Kashmir, Ladakh has demanded statehood and more constitutional guarantees, which they used to enjoy under Article 370.