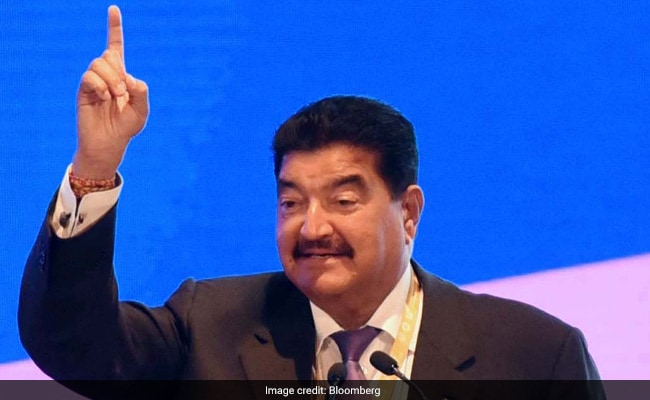 Bavaguthu Raghuram Shetty had more than enough money, at least on paper.

Bavaguthu Raghuram Shetty was once a typical billionaire with a taste for the high-life.

He splurged on a private jet, vintage cars and two entire floors of the Burj Khalifa, the world's tallest skyscraper. His website shows him hobnobbing with politicians, Bill Gates and Bollywood royalty.

Shetty had more than enough money -- at least on paper -- to afford such a lifestyle from companies he helped found, including hospital operator NMC Health Plc and financial services firm Finablr Plc. On Dec. 10, his stakes in the public companies were valued at $2.4 billion, making up the bulk of a fortune spanning education, hospitality and one of the world's oldest tea companies.

Then, a week later, Carson Block came along.

Block's investment firm, Muddy Waters, issued a report criticizing NMC's accounts and disclosing a short position. Since then, Muddy Waters's scrutiny has snowballed into a troubling scenario for Shetty that sheds light on his complex share arrangements and casts doubts about his net worth. His holdings in Finablr and NMC are worth $885 million based on market closing prices Tuesday, but Shetty's fortune may now be just a fraction of that, depending on the size of his borrowings. 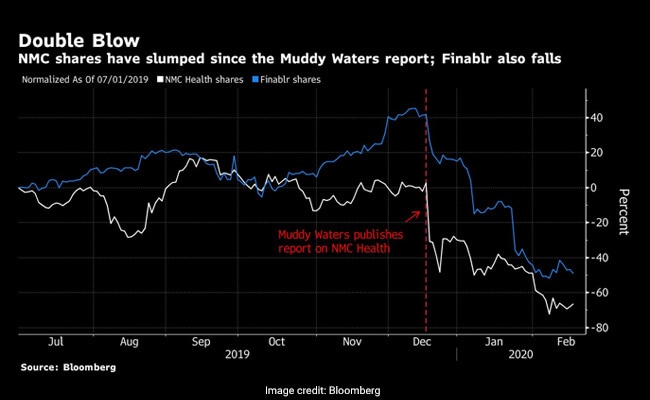 NMC shares have slumped since the Muddy Waters report.

Filings this month show that Shetty pledged a quarter of his NMC stake against loans with First Abu Dhabi Bank and Zurich-based Falcon Private Bank. Two other shareholders may own half of his reported stake. Another lender -- Al Salam Bank Bahrain -- has already sold some of those shares to enforce security over a loan for Shetty, and NMC said Tuesday that First Abu Dhabi Bank sold another chunk earlier this month.

The situation "seems to have gone beyond some of the issues that Muddy Waters focused on initially," said Gavin Launder, a fund manager at Legal & General Investment Management, who owned shares in NMC until October. "The increased scrutiny has unearthed other issues."

Law firm Herbert Smith Freehills has launched a review of Shetty's holdings at his request, a spokesperson for the Indian-born businessman said, declining to comment further until the analysis is completed. Shetty resigned Sunday as NMC's chairman.

In its December 17 report on NMC, Muddy Waters hinted at potential overpayment for assets, inflated cash balances and understated debt. Shares of the United Arab Emirates' biggest private health-care provider have since plunged more than 67%, and the firm is now the focus of takeover speculation. The sell-off also spread to Finablr, which issued a statement Wednesday calling for the Shetty family to clarify their holdings in the company by the end of the month.

Shetty is hardly the only ultra-wealthy person to leverage his assets. Elon Musk has used his shares in Tesla Inc. to obtain personal loans, while Oracle Corp. Chairman Larry Ellison has put up millions of the company's shares to fund a lavish lifestyle that includes trophy properties, America's Cup teams and the Indian Wells tennis facility in California.

But such deals can also sour, as demonstrated by Shetty's lenders selling shares his investment firm pledged. He and his advisers are investigating details of the sales as part of their legal review, according to filings.

To complicate matters, Shetty pledged another batch of NMC stock in 2018 as part of a so-called equity collar arrangement with Goldman Sachs Group Inc. that uses options to limit the impact from share moves. Last month, he also pledged most of his stake in Finablr to refinance a loan from the company's takeover of foreign-exchange firm Travelex for about $1.2 billion.

BRS Ventures Investment, the UAE-based holding company for most of Shetty's assets, doesn't report consolidated financials, preventing a complete analysis of his net worth. His other assets include a catering company, a waste-management firm and pharmaceutical business Neopharma, which four months ago was in the early stages of planning for an initial public offering.

Block, 43, earned his reputation as a short seller a decade ago through targeting U.S.-listed Chinese companies that he claimed were frauds. More recently, his San Francisco-based firm focused on British litigation-finance firm Burford Capital Ltd. and Japanese biotech stock PeptiDream Inc. Short sellers seek to benefit from a decline in a company's share price.

Shetty founded NMC in 1975 after moving to Abu Dhabi from his native India. He created Finablr two years ago to consolidate his financial brands before listing it on the London Stock Exchange in 2019.

"I wouldn't have been able to predict that we'd get these bizarre disclosures about unclear share ownership coming out of the company," he said in a Feb. 13 phone interview. "This has been obviously a more dramatic unraveling than we usually see."