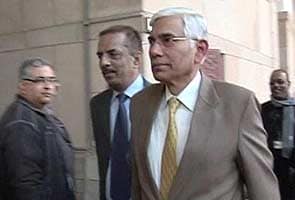 Tewari's questions to the Comptroller and Auditor General (CAG) Vinod Rai were believed to be focussed on the different loss estimates ranging from Rs. 57,000 crore to Rs. 1.76 lakh crore arrived at by the CAG and the logic behind using the methodology for calculating the loss figures.

At one time during the hour-long meeting, BJP member Ravishankar Prasad is understood to have objected to the manner in which Tewari was putting questions to "a senior official like the CAG".

There were attempts by members to put some supplementary questions to the CAG which was disallowed by JPC Chairman P C Chacko.

Rai had earlier appeared before the JPC on November 15 and the recording of his evidence was incomplete as almost every member had questions for him.

Tewari had just begun asking questions to Rai when the meeting was adjourned on November 15.

At today's meeting, Tewari sought to know from the CAG as to how the auditor had taken into consideration the bids made by Chennai-based telecom operator S-Tel while calculating the losses as the firm's offer was cancelled by the government.

Promoted
Listen to the latest songs, only on JioSaavn.com
Rai was also asked whether there was any single figure of loss estimates on which there was unanimity among all the auditors in the CAG institution.

When Rai pointed out that the figure was Rs 1.02 lakh crore, some members pointed out that CAG's lead auditor R P Singh, who had appeared before the JPC on November 14, had a different view.