Two terrorists, including a Pakistani national, shot dead the driver of a Rajasthan truck and assaulted an orchard owner in Shopian district of Jammu and Kashmir around 8 pm on Monday. 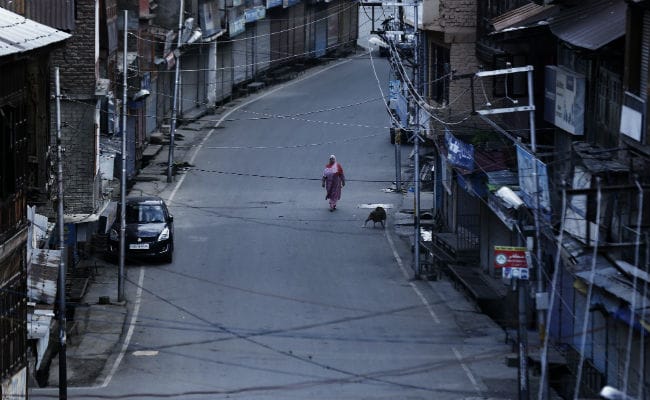 Mobile and internet communications were blocked in the Kashmir Valley on August 5.

Hours after post-paid mobile phone connections were restored in Kashmir Valley on Monday after 72 days, SMS services were stopped as a "precautionary measure", officials said today.

Mobile phone services for post-paid subscribers resumed in Kashmir after 72 days on Monday noon, but without any internet facilities. By about 5 pm, SMS services had been suspended too, dulling the euphoria of about 40 lakh subscribers delighted at the prospect of their phones coming back to life, officials said.

"SMS services were stopped last evening as a precautionary measure," said an official without elaborating further.

Two terrorists, including a Pakistani national, shot dead the driver of a Rajasthan truck and assaulted an orchard owner in Jammu and Kashmir''s Shopian district around 8 pm on Monday.

The truck driver was identified as Sharief Khan and the terrorists carried out the attack in Shirmal village in desperation as fruit transportation was picking up in the Valley.

Mobile and internet communications were blocked in the Kashmir Valley on August 5, when the centre revoked Jammu and Kashmir's special status and reorganised the state into two union territories.

The government kept to its promise of mobile phones working by Monday noon, but the joy was short-lived. Thousands of subscribers found their services disconnected by telecom companies due to non-payment of bills for the period of the suspension of services.

Till late Monday evening and from early Tuesday, serpentine queues formed outside the offices of telecom companies as subscribers rushed to clear their outstanding bills.

It is a cumbersome process with online payments not an option because of internet services being blocked in Kashmir, many subscribers complained.

While landline phones were restored last month, internet services on all platforms continue to remain suspended.

Governor Satya Pal Malik on Monday said internet services would resume very soon, but officials in the security establishment maintained the process might take up to two months.

A decision on pre-paid subscribers could be taken next month, they said.

In Jammu, communication was restored within days of the blockade and mobile internet was started around mid-August. However, after its misuse, internet facilities on cell phones was snapped on August 18.

As Kashmiris in the Valley hoped their post-paid mobiles would help them reconnect with the outside world, the deadlock over the scrapping of the special constitutional provision for Jammu and Kashmir continued.

Markets and other business establishments remained closed while most of the public transport was off the roads across the Valley.

A large number of private vehicles and some private taxis, including autorickshaws, could be seen plying in many parts of Srinagar while some roadside vendors also plied their trade.

The efforts of the state government to open schools have not borne any fruit as parents continued to keep children home due to apprehensions about their safety.

Government offices are open and attendance in most offices is near normal, the officials said.

Most top level and second rung separatist politicians have been taken into preventive custody while mainstream leaders including two former chief ministers -- Omar Abdullah and Mehbooba Mufti -- have been either detained or placed under house arrest.

The government has detained former chief minister and sitting Lok Sabha MP from Srinagar Farooq Abdullah under the controversial Public Safety act, a law enacted by his father and National Conference founder Sheikh Mohammad Abdullah in 1978 when he was the chief minister.