Foreign Secretary Harsh Vardhan Shringla referred to External Affairs Minister S Jaishankar's remarks that the ability of India and China to work together will determine the Asian century. 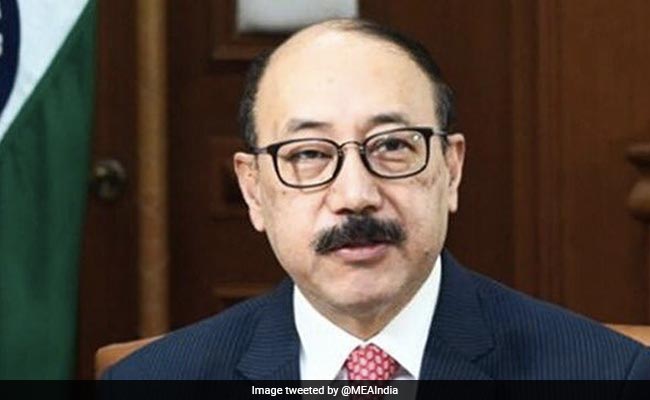 Asserting that peace and tranquillity in the border areas is a "sine qua non" for India and China to work together, Foreign Secretary Harsh Vardhan Shringla today said New Delhi hopes that Beijing will work with it to bring a satisfactory resolution to the current issues, keeping in view each other's sensitivities and interests.

In his remarks at a seminar on "Leveraging China's Economy", Mr Shringla also said the developments along the Line of Actual Control (LAC) in Eastern Ladakh have "seriously disturbed" the peace and tranquillity in border areas, and this has obviously had an impact on the broader relationship too.

The foreign secretary also referred to External Affairs Minister S Jaishankar's remarks that the ability of India and China to work together will determine the Asian century.

"For this to materialise, peace and tranquillity in the border areas is a sine qua non. He (S Jaishankar) has also clearly articulated that development of our ties can only be based on mutuality -- mutual respect, mutual sensitivity and mutual interests should guide this process," Mr Shringla said.

"We hope that the Chinese side will work with us to bring a satisfactory resolution to the current issues so as to make progress on our bilateral relations keeping in view each other's sensitivities, aspirations and interests," the foreign secretary said.

As a result of a series of military and diplomatic talks, the two sides completed the disengagement process in the Gogra area in August and in the north and south banks of the Pangong lake in February.
Each side currently has around 50,000 to 60,000 troops along the Line of Actual Control (LAC) in the sensitive sector, according to sources.

In his remarks, Shringla also talked about the issues of concerns in the Sino-India trade relationship such as the widening trade deficit and increase in trade barriers.

"China is our largest neighbour. With its GDP reaching $14.7 trillion in 2020, China's economy is the second-largest in the world. Under the shadow of ongoing COVID-19 pandemic, China is the only major economy to have registered positive growth in 2020," he said.

Being the largest contributor to world trade and our largest trading partner, it is imperative for us to have a better understanding of China's economy, Mr Shringla said.

He noted that India's relations generally followed a positive trajectory since 1988 when the two country's re-established contacts at the highest level.

"We were engaged in developing a broad-based bilateral relationship. The advancement of ties in this period was clearly predicated on ensuring that peace and tranquillity were not disturbed. The areas of cooperation were not limited to bilateral but also had regional and global dimensions," he said.

It was also recognised that relations between India and China were in the interest of not only our two countries but also in the interest of peace, stability and security in the region and world at large, Mr Shringla said at the seminar organised by the Centre for Contemporary China Studies.

Noting that last year, the total trade volume between the two countries was around $88 billion, Mr Shringla said in the first nine months of this year, the bilateral trade touched $90 billion, an increase of 49 per cent over last year.

"At this rate, we are likely to attain the highest ever bilateral trade between two countries," he said.

The trade, however, remains unbalanced with a large trade balance in favour of China, Mr Shringla said.

"Our trade deficit concerns are two-fold - the first is the actual size of the deficit. The trade deficit for the nine months period stood at USD 47 billion. This is the largest trade deficit we have with any country. Second, is the fact that the imbalance has continuously been widening," the foreign secretary said.

There are a number of market access impediments including a whole host of non-tariff barriers, for most of our agricultural products and the sectors we are competitive in, such as pharmaceutical, IT/ITES, etc., he said.

"We have highlighted that widening deficit and increase in trade barriers are issues of concern. These have been regularly flagged at the highest level, most recently at the 2nd Informal Summit between our Prime Minister (Narendra Modi) and the Chinese President in Chennai in 2019," Mr Shringla said.

He also said the government remains firm in its commitment to place this trade relationship on a more sustainable footing and raising these issues at all appropriate occasions with the Chinese side.

Developments since then, including the COVID-19 pandemic, have not been helpful in our efforts to address these concerns, the foreign secretary said.

"Furthermore, the developments along the LAC in Eastern Ladakh have seriously disturbed the peace and tranquillity in border areas. This has obviously had an impact on the broader relationship too," he said.

"Even as we continue to pursue these issues with China, we also need to do work at home. That is why, Atmanirbhar Bharat -- an India with greater capabilities not just helping itself but being a force for good in the international arena, becomes important," Mr Shringla said.

He asserted that the digital economy is now an integral part of India's development story.