Holi 2021: Vrindavan and Mathura, the land of Radha and Krishna, is famous for Holi celebrations. It is popularly referred to as Braj Ka Holi and Lathmar Holi Holi 2021 images: Know all about the famous Lathmar Holi of Barsana in Brijbhoomi

Holi celebrations and its significance: Holi in Vrindavan and Mathura, the land of Radha and Krishna, is unique. It is popularly referred to as Braj Ki Holi, Vrindavan Holi or Mathura Holi. This year due to the pandemic, the celebrations are expected to be a low-key affair but in earlier years, people from far would come to Brijbhoomi for a one-of-a-kind experience during Holi. Braj or Brijbhoomi refers to the area on either side of the Yamuna river with Mathura and Vrindavan as the centre.

Holi in Brijbhoomi is not a one-day event. It usually goes on for a week surrounding legends and local folklore. Holi in Vrindavan or Mathura Holi starts on 23 March and ends on 30 March. The festivities also have a different name for each day like Lathmar Holi of Barsana and Nandgaon, Phoolwalon Ki Holi at Vrindavan's Bankey Bihari Temple, Gokul Holi and the Widows' Holi in Vrindavan. 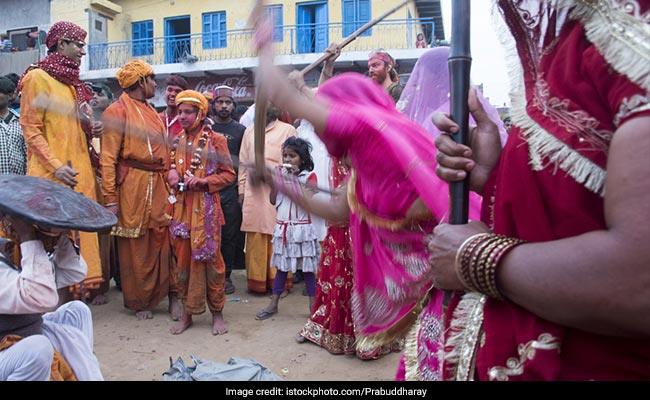 Holi 2021 images: Women dress up as Gopis and men as Gops during Lathmar Holi

Lathmar Holi of Barsana is centered around the legend of Radha and Krishna. The men from Krishna's village, Nandgaon, comes to Barsana where Radha and her friends lived. Women traditionally dress up as Gopis and the men as Gops. The women playfully 'hit' the men with sticks to drive them away and also play with colours. Here's a video of Lathmar Holi: