Released convict runs cracker shop in front of where Bilkis Bano lived; she has not come to the village since she and her family were attacked in 2002

Govind Nai, one of 11 convicts released prematurely by BJP's state and central governments.

Right across the road from Bilkis Bano's house, there's a stall selling firecrackers doing brisk business for Diwali. It belongs to Radheshyam Shah, who raped her and killed her family members but is now settling back into his life.

She no longer lives here.

She lives in fear, away from the village avoiding further danger. All of the convicts have homes in and around the village, Randhikpur in Gujarat's Dahod district, that has barely 4,000 residents.

"We're innocent. Have you seen an uncle and nephew rape someone in front of each other? Does it happen in Hindu community? No, Hindus don't do that," argued Govind Nai, one of 11 life-term convicts in the 2002 Gujarat riots case who have been released prematurely by the BJP's state and central governments.

NDTV has found that Govind Nai and some others among these men allegedly threatened witnesses when out on parole. Yet they were released for "good behaviour". They spent nearly three years out on such paroles before being released altogether this Independence Day, the day Prime Minister Modi spoke of "respecting women" in his Red Fort address.

Govind Nai allegedly threatened two persons who had testified against him in the Bilkis Bano case in July 2017. He did not want to speak of that, or take any question.

"Just get lost from my village," he said when NDTV went to his home earlier this week. His father was also present at the family home, but refused to speak.

Bilkis Bano has never come to live in the village since that night in 2002. Her house is now a shop, which she her family has rented out to a Hindu woman who sells clothes. Bilkis Bano and her family's former home in the village.

A multi-storied house just in front of Bilkis Bano's house is home to convict Radheshyam Shah.

His younger brother, Ashish Shah, has been selling crackers on a stall in front of it. "Radheshyam doesn't' live here anymore," he claimed.

Radheshyam Shah and another convict, besides Ashish, are named in an FIR for assaulting a woman while out on parole. Ashish Shah said that FIR is "baseless". He did not speak further.

Complainants in that case, Saberaben Ayyub and Pintu Bhai, Muslim residents of the Hindu-majority village, stand by their charges, but say they are now living in fear.

Another convict, Rajubhai Soni, was at his jewellery shop but left as soon as he saw cameras.

NDTV tried to access officials who were part of the process that cleared the early release of these men, but they did not respond. The District Magistrate was not responsive while the Superintendent of Police, who also approved the release, disconnected the call after NDTV sought a response. 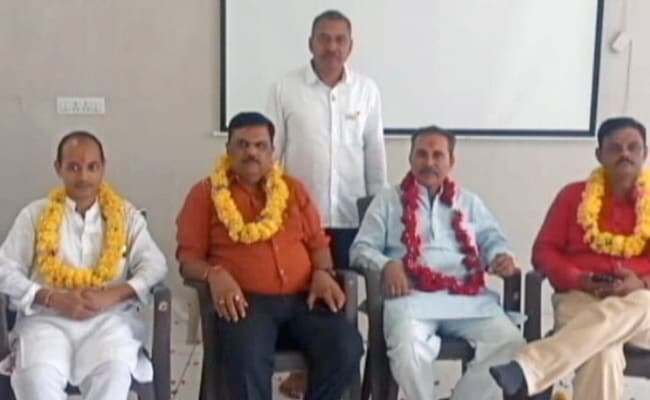 The convicts were greeted with garlands at Vishwa Hindu Parishad office after their release On Aug 15.

Bilkis Bano, 21 years old and five months pregnant at the time, was gangraped and her three-year-old daughter was among 14 people killed by a mob on March 3, 2002, in Dahod in violence that broke out across the state after a train was attacked in Godhra and 59 passengers, mainly 'kar sewaks', were burnt to death. PM Narendra Modi was the chief minister at the time.

The BJP has not lost power in the state since. The next assembly elections are due by the end of this year.

Bilkis Bano had released a statement after the men's release, saying "the trauma of the past 20 years washed over me again... I am still numb".

"My sorrow and my wavering faith is not for myself alone but for every woman who is struggling for justice in the courts. No one enquired about my safety and well-being before taking such a big and unjust decision. I appeal to the Gujarat government, please undo this harm," she said.

Petitions against the release have since been filed in the Supreme Court by some organisations and individuals, including Bengal's Trinamool Congress MP Mahua Moitra.