Heroin Worth Rs 4.5 Crore, Hidden In Soap Cases, Seized From Truck In Assam

The truck driver and his helper - residents of Manipur's Thoubal district - were arrested in connection with the drug haul. 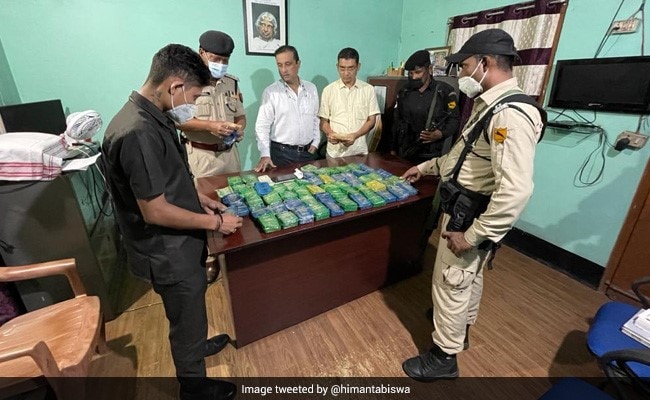 The drugs were concealed inside the engine cover of the vehicle, the police said

In a major drug bust, the Assam Police intercepted a truck on the outskirts of Guwahati today morning and seized 660 grams of heroin worth over Rs 4.5 crore in the international market.

The truck driver and his helper - identified as Warish, 26, and Jennyson Tayenjam (20) - were arrested in connection with the drug haul. Both are residents of Manipur's Thoubal district.

"Acting on specific information about the shipment of the drug consignment from Manipur, a search was launched at Jorabat around 4:30 am. The drugs were concealed inside the engine cover of the vehicle," a police official said.

Sixty packets of heroin, weighing around 660 grams, were recovered. The drug was packed in plastic soap cases, he said.

"We have also recovered Rs 45,000 in cash from the driver of the truck along with two mobile phones," the police official added.

Praising the police's action, Assam Chief Minister Himanta Biswa Sarma tweeted, "Kudos @asssmpolice as you continue to tighten the noose around drugs mafia. This morning, police intercepted an inter-state consignment of drugs at Jorabat and seized 660 gms Heroin worth over Rs 4.5 cr in international market & arrest 2 so far. Good."

The narcotic substances have been seized as per procedure and a case has been registered, the police said, adding, further investigation is underway.

The Assam police, in recent times, have cracked down on the illicit drug racket prevalent across the state and seized huge quantities of narcotic substances.