"We pledge our 'route' system will be such that citizens are held up for the shortest possible time," Kanpur Police Commissioner Asim Arun tweeted

The Uttar Pradesh Police has apologised after a woman in Kanpur died on Friday night because she and her family were reportedly delayed by traffic restrictions during the visit of President Ram Nath Kovind.

President Kovind is on a three-day visit to UP, during which time he will visit his home village, which is in the neighbouring 'Kanpur Dehat' district. He reached Kanpur last night by train, and will spend Monday and Tuesday in Lucknow.

Vandana Mishra, the 50-year-old woman who died, was the head of the women's wing of the Kanpur chapter of the Indian Association of Industries. Her family had rushed her to a private hospital last night after she fell seriously ill. Reports say Ms Mishra recently recovered from Covid.

The emergency hospital visit coincided with President Kovind's arrival in Kanpur, for which the police reportedly stopped traffic along the same route Ms Mishra's family was taking.

Reports say the situation led to a traffic pile-up and an inordinate delay, and Ms Mishra was pronounced dead on reaching the hospital.

"On behalf of Kanpur Police and myself, I am deeply sorry about the demise of Vandana Mishra. This is a big lesson for the future. We pledge our 'route' system will be such that citizens are held up for the shortest possible time so such incidents are not repeated," Kanpur Police chief Asim Arun tweeted.

Another tweet said President Kovind was disturbed by the incident.

"He (the President) called the police commissioner and the district magistrate and enquired about the incident. He asked officials to personally convey his condolences to the family," the police said.

A senior police official has been asked to carry out an inquiry, and a sub inspector and three constables have been suspended over the incident. 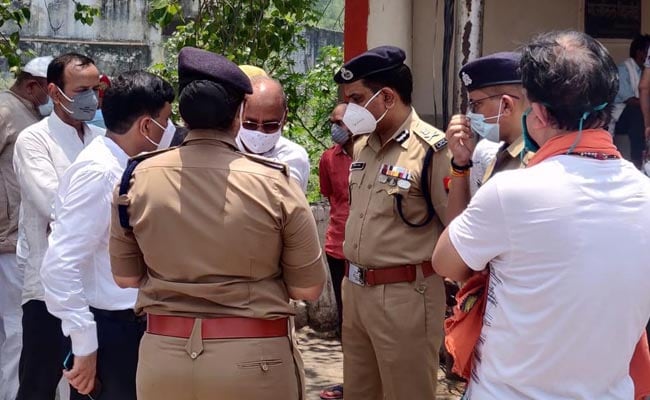 Photographs from the ghat where Ms Mishra was cremated showed officials meeting with the distraught family members.