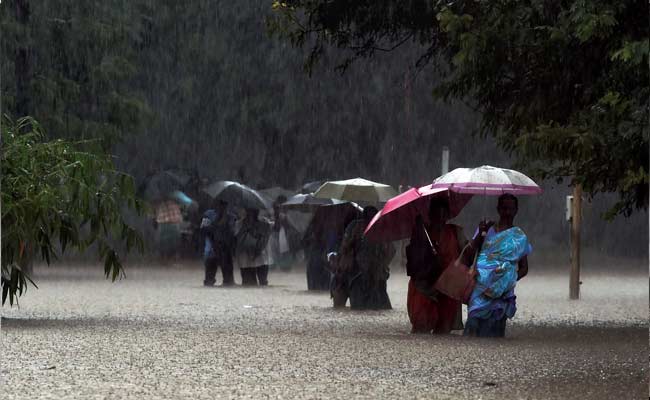 Flood water gushed onto the streets cutting off roads and rail tracks in Palnadu, Andhra Pradesh.

Vijayawada: Heavy downpour since last night caused havoc in Guntur and Prakasam districts of Andhra Pradesh as normal life was thrown out of gear.

A middle-aged woman was killed when the wall of her house collapsed due to heavy rain at Karalapadu village under Dachepalli mandal in Guntur district, an official said.

The flood water gushed onto the streets, inundating agriculture fields, cutting off roads and rail tracks in Palnadu region of Guntur.

Rivulets were in spate while tanks started overflowing as the rainfall touched a maximum of 24.7 cm.

Passenger train services between Macherla and Guntur were cancelled after a 500 m portion of the railway track at Gurazala Gate halt was washed away in the flood caused by the Dandi rivulet, he said.

It also inundated the Venkatrao Nagar colony in the town, forcing people to stay indoors.

Some families had to climb onto their rooftops as flood water gushed into their houses.

Road transport between many villages in Palnadu remained cut off as the rivulets remained in spate, spilling flood water onto the causeways, the official said.

Flood water was flowing menacingly close to the Addanki-Narketpalli highway that connects Telangana with Andhra Pradesh. However, traffic was so far not affected on this stretch near Dachepalli in Guntur district, official sources said.

In Karempudi mandal of Guntur district, 24.7 cm of rainfall was recorded followed by 21 cm in Durgi and 20.6 cm in Jangameswaram.

Gurazala MLA Y Srinivasa Rao and Revenue Divisional Officer Murali have been touring the flood-hit parts of the region and supervising rescue and relief operations.

Promoted
Listen to the latest songs, only on JioSaavn.com
About two feet of flood water flowed into the sanctum sanctorum of Trivikrama Swamy temple at Cherukuru in the district.