Incessant rain has led to the rise in water level in several rivers in Odisha. 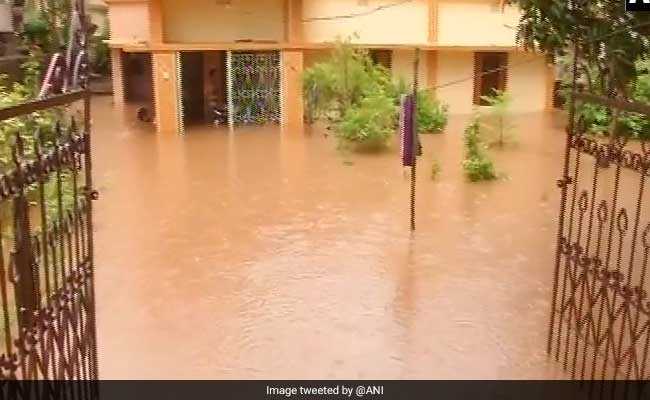 Life was thrown out of gear in many parts of Odisha today following incessant rain that has led to waterlogging in low-lying areas and snapped road links in several places.

Most parts of southern, western and coastal Odisha are reeling under water-logging which has disrupted vehicular movement. Water level was also rising in major rivers, officials said.

Special Relief Commissioner (SRC) B P Sethi said 12 districts of the state have received an average of 50 mm rainfall since yesterday. High volume of rainfall was recorded in districts like Kalahandi and Nuapada, he said.

Incessant rain has led to the rise in water level in several rivers, he said and added that officials concerned have been asked to remain watchful as rain was likely to continue till tomorrow, mainly in south and coastal Odisha.

Normal life was hit in the state capital of Bhubaneswar, Cuttack and the seaside pilgrim town of Puri due to continuous rain.

The incessant rain and the resultant water logging has prompted authorities to declare closure of all schools in Cuttack for the day, officials said.

To deal with the situation, the Bhubaneswar Municipal Corporation (BMC) has opened a control room for lodging of complaints about water logging.

The situation is equally bad in Puri where the people are seen struggling to reach their destinations. Devotees, who thronged the holy town for the Ratha Jatra festival of Lord Jagannath, have to wade through knee-deep water on 'Bada

Danda', the Grand Road. A portion of a boundary wall of the Markendaya pond in Puri collapsed following rain.

Incessant rain also wreaked havoc in Kalahandi, Rayagada and Ganjam districts where several villages have been cut-off due to submergence of roads.

The water level in the Hati and the Tel rivers in Kalahandi district is rising steadily but remains below the danger mark, officials said adding rain water inundated many places in Dharmagarh and Junagarh areas of the district.

In view of the situation, all measures have been taken to provide dry foods and tarpaulin to people in the areas affected, an official said.

In Ganjam district, the situation remained grim as rainwater gushed into houses and farmlands in low-lying areas at Kabisuryanagar and Aska. Road links have been snapped in some areas, he said.

In Rayagada district, rainwater has submerged many villages in Bissamcuttack and Paikadakuluguda areas, whilethe Bansadhara river level is rising.