"We honestly want to honour your sentiments. I am convinced that you will intensify your respect for Parama Poojya Swamiji and you will enable us to felicitate Swamiji with the Bharat Ratna..," HD Kumaraswamy said. 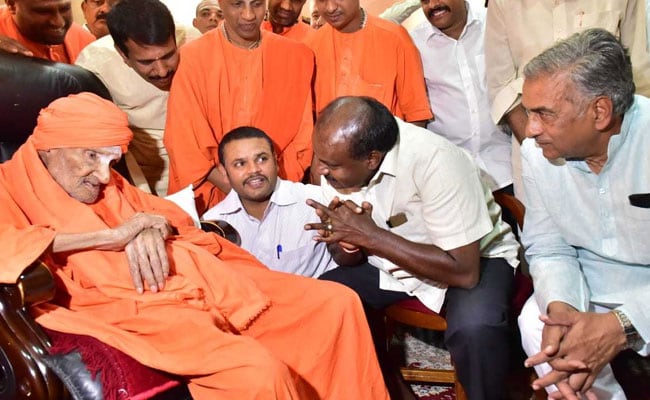 Karnataka Chief Minister HD Kumaraswamy on Thursday asked followers of Shivakumara Swamiji to play a major role for getting the Bharat Ratna conferred on the late Seer.

This is seen as a bid to woo the politically and numerically strong Lingayat community in Karnataka ahead of the Lok Sabha polls.

"We honestly want to honour your sentiments. I am convinced that you will intensify your respect for Parama Poojya Swamiji and you will enable us to felicitate Swamiji with the Bharat Ratna..," Mr Kumaraswamy said.

"Today, there have been some flaws in giving the Bharat Ratna awards but if you empower us with an opportunity, we will honour your wish by giving the award to the Swamiji," Mr Kumaraswamy asserted.

The chief minister was addressing a huge gathering at Siddaganga Mutt at Tumakuru during the 11th day ritual to mark the passing away of the seer.

Known for his philanthropy, the Swamiji turned his Siddaganga Mutt into a major education centre for students of underprivileged communities, built schools and hostels and started feeding hundreds of students free of cost, much before the mid-day meal programme was conceived by governments.

The seer's followers spread across Karnataka, Tamil Nadu, Andhra Pradesh and Maharashtra demanded that the country's highest civilian award be conferred on him.

Harping on the public demand to honour the Swamiji with the Bharat Ratna, Mr Kumaraswamy said "I am very confident that in all likelihood we will get the opportunity to give Bharat Ratna to the Swamiji in the next 6-7 months. I have conveyed the message subtly."

Mr Kumaraswamy said during his previous stint as chief minister in 2006, he had written to the President to confer the award on the seer.

The chief minister told the audience that he honestly wanted to honour their sentiments.

He said the Swamiji was a "Vishwa Ratna" (a gem of the world).