Hathras Case: Mother of the 20-year-old woman, who died in Delhi on Tuesday two weeks after she was gang-raped and tortured, details her daughter's plight and the family's ordeal. 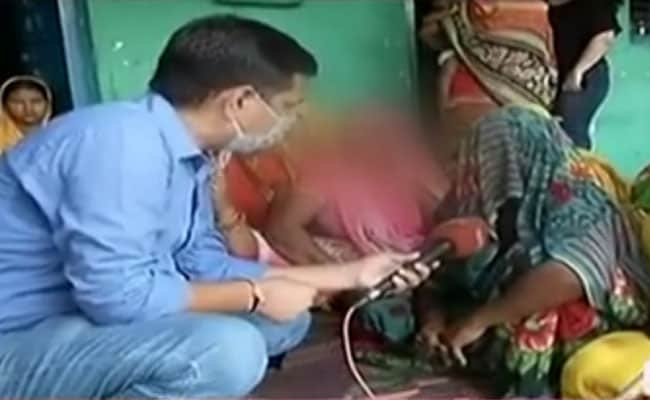 A 20-year-old woman died Tuesday after her gang-rape and torture by four men in Uttar Pradesh's Hathras.

There was blood flowing out of her mouth when the mother of the 20-year-old woman, who died in Delhi on Tuesday two weeks after she was gang-raped and tortured in Uttar Pradesh's Hathras, found her naked body in the fields on September 14.

The Hathras victim's mother told this to NDTV hours after the Uttar Pradesh police hurriedly cremated her daughter in the dead of the night against the family's wishes or allowing them a last look. The woman detailed her daughter's plight and the family's ordeal over the last 15 days.

The extent of the woman's injuries - multiple fractures, paralysis caused by spinal injury and a gash in her tongue - has led to the parallels being drawn with the Nirbhaya gang-rape. In 2012, a medical student was gang-raped and fatally assaulted on a moving bus in Delhi, leading to outrage and protests across the country.

"We were working in the fields when they dragged her away. I was cutting grass and she had moved away to collect it. When I turned to look, I couldn't find her. I shouted and hunted for her and spotted one of her slippers. There were drag marks near it. I followed them to find my daughter lying naked with blood coming out of her mouth; she wasn't being able to talk, her tongue had been slashed," the woman told NDTV.

The woman added they were sent away from the local police station when they went to file a complaint. "We went to Hathras and then to Aligarh; my daughter couldn't talk so they didn't file a case of gang-rape," she said.

She added that on Tuesday night, the police beat the women and others with lathis when they tried to stop them from cremating her daughter. "We had to even lock ourselves in our house because the police were chasing us to beat us and take us away. We got scared," the woman told NDTV.

The UP Police is under scrutiny over alleged lapses throughout the case.

According to the family, the police had at first accused the woman of lying about her injuries. The police had initially registered an attempted murder case but added rape charges only after the woman's formal statement a week after the incident, when she was able to speak. On Tuesday, a senior officer said rape had not been confirmed and they were waiting for a forensic report.

There have also been allegations of delay in taking the woman to a bigger medical facility despite the seriousness of her injuries.

While some officials have claimed the family refused to shift her, the woman's sister-in-law was seen questioning Hathras MLA Rajvir Singh Diler in front of reporters. "Why was she kept in a general ward for seven days?" she asked.

Amid nationwide outrage over the incident Chief Minister Yogi Adityanath said a three-member panel has been set up to investigate the crime and a report would be submitted within seven days.

He added that Prime Minister Narendra Modi has called for the "strictest action against the accused" in the gang-rape and torture of a 20-year-old woman in Uttar Pradesh's Hathras.

Four men have been arrested for gang rape. They will also be tried for murder.