Kuldeep Kumar had announced that he has tested positive for coronavirus and that he will be in home isolation. 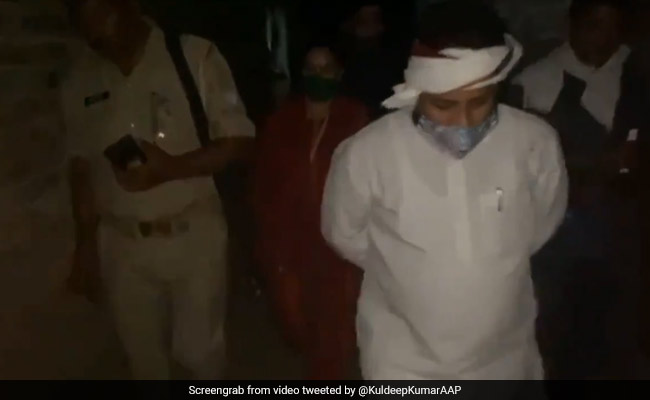 The Uttar Pradesh police has registered a case against an Aam Aadmi Party MLA, who had tested positive for coronavirus, after he posted videos of his visit to Hathras in Uttar Pradesh, where a young Dalit woman was allegedly gang raped and tortured. The MLA, however, said he travelled to Hathras only after testing negative for the virus.

On September 29, Kuldeep Kumar announced that he has tested positive for coronavirus and that he will be in home isolation. "I have mild fever for the last two days and I got a COVID-19 test done today. The report has come out as positive. I will be in home isolation. Those who came in contact with me in the last two to three days, please get yourselves tested," Mr Kumar, the MLA from Delhi's Kondli, had tweeted.

Five days later, Kuldeep Kumar posted videos of him, saying he is in Hathras, 200 km from Delhi, to meet the family of the 20-year-old woman who died last week. The MLA is seen wearing a mask and walking up to the woman's house at night. He was accompanied by the police and sveral others.

In another video he tweeted, he is seen sitting close to the family members and interacting with them. The MLA hit out at the Yogi Adityanath government, saying, "Just returned after meeting the family of the Hathras victim. An atmosphere of fear in the family is being created. This is the murder of democracy and Constitution. In Uttar Pradesh's Yogi-raj, there is no law but jungle -raj," Mr Kumar tweeted in Hindi.

The newly-appointed Superintendent of Police in Hathras said a case has been filed against Mr Kumar under the Epidemic Diseases Act.

"I got to know from TV media that Hathras police has filed an FIR against me.  BJP leaders and the IT cell have together spread the propaganda that an AAP MLA went with corona to Hathras. I went to meet the Hathras family after a negative report...If Hathras police had asked for my negative report, I would have shown it," Kuldeep Kumar said.

Under immense criticism, the state police had filed 19 First Information Reports (FIRs) across the state alleging attempt to disturb peace in the state.

The 20-year-old woman was assaulted by four men of the so-called upper caste community at her village in Hathras on September 14 and left with horrific wounds including fractures, a spinal injury that left her paralysed and a gash in her tongue. The UP police, accused of a slow response to the woman's complaint, has alleged that there was no rape or gang rape involved and that a forensic report proves it.

That claim has been questioned by experts who point out that the samples were taken 11 days after the woman was attacked.