Six men barged into a police station in Alwar, 166 km from Delhi, early this morning and fired several rounds of gunshots at the station building.

One of the most-wanted criminals in Haryana managed to escape from a police lock-up in Rajasthan this morning, in a scene straight out of a Bollywood thriller.

Six men barged into a police station in Alwar, 166 km from Delhi, at around 8:45 on Friday morning and fired several rounds of gunshots at the station building. The gang escaped with a man called Vikram Gujjar who was in the lock-up. The police are suspecting that the men used AK-47s rifles. Though 25 rounds appeared to have been fired, no one has been injured.

The gang sped away in a white Hyundai i20, the police said. After abandoning the hatchback, they stopped a Mahindra Scorpio which was later found abandoned.

There was a bounty of Rs. 1 lakh on Vikram Gujjar, also called Papla. The 28-year-old is wanted in seven criminal cases in neighbouring Haryana's Mahendragarh. Rajasthan Police officials who caught him on Thursday night did not know that he was wanted in Haryana.

He was detained for questioning at the Behror police station after police intercepted his SUV during patrolling late Thursday night. An amount of Rs 31.90 lakh was seized and he was taken into custody for further interrogation, police said. 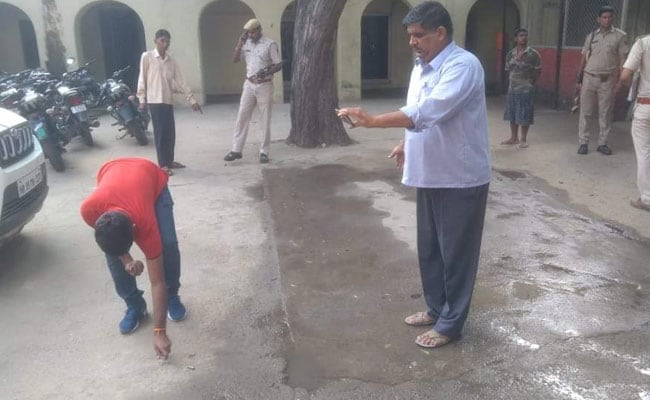 Six men barged into a police station in Alwar and fired several rounds of gunshots.

Top police officers are at the police station after what is seen as one of the most daring jailbreaks in Rajasthan. Barricades have been set up on all roads leading out of Alwar to catch the gang.

"This criminal carried a reward of Rs. 1 lakh and I am told that he escaped in a similar fashion from a court in Haryana's Mahendragarh area. Our police is on the lookout for them and we are in touch with the Haryana DGP," Rajasthan Chief Minister Ashok Gehlot said.

The Rajasthan police chief is in touch with his Haryana counterpart.