Haryana Elections 2019: Swaraj India, which is contesting elections for the first time, promised to generate employment opportunities in several verticals including education, health and industry. 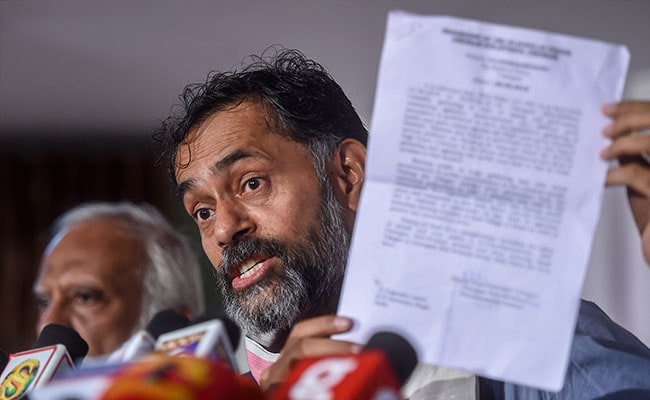 Rolling out its election manifesto for the October 21 Haryana polls, Swaraj India on Saturday promised to create 20 lakh employment opportunities at an outlay of Rs 20,000 crore in the state.

The party, which is contesting elections for the first time, promised to generate employment opportunities in several verticals including education, health and industry.

Naming its poll manifesto as ''Imaan Patra'', the party proposed to raise money by imposing tax on vacant plots in urban areas, additional house tax and by checking "corruption" in mining business.

Party chief Yogendra Yadav told reporters in Chandigarh that unemployment is the biggest problem in the state, but no political party has come out with any blueprint or roadmap to address this issue.

He said as per a Centre for Monitoring Indian Economy (CMIE) report, at least 20 lakh people are unemployed in Haryana.

"We are bringing seven missions in our manifesto to address the problem of unemployment," said Mr Yadav.

The psephologist-turned-politician said a sum of at least Rs 20,000 crore is needed to create job opportunities for 20 lakh people in the state.

Underscoring the need for improving the education system, the party proposed to hire more nursery teachers to teach students aged three to six years in villages.

"This step will generate employment opportunities to 73,000 people," he said.

The party also proposed to expand health facilities and hire more doctors and other supporting staff to strengthen medical services.

Swaraj India also proposed to raise support prices for major crops including wheat, paddy, ''bajra'' etc, asserting that farming sector needed to be supported by remunerative prices to growers for their crops.

He also proposed to introduce separate budget for the farming sector.

The party also sought to launch a major afforestation campaign and a drive to rejuvenate village ponds to create more employment opportunities.

It also proposed to fill one lakh vacant posts in different government departments in the state.

For raising money to fund the Rs 20,000 crore budget for employment creation, Mr Yadav said efforts would be made to recover outstanding tax of Rs 25,000 crore.

He said two per cent vacant land tax should be imposed on vacant plots in urban areas on the lines of tax being collected in similar way in several countries.

Money could also be raised through levying additional house tax in city areas, he added.

Swaraj India has fielded 28 candidates in Haryana out of total 90 assembly seats.