"Come For Re 1," Sushma Swaraj Said. In Minutes, Shock For Harish Salve

Harish Salve shared the phone conversation he had on Tuesday evening with Sushma Swaraj, who, as Foreign Minister in Prime Minister Narendra Modi's first term, led India's diplomatic efforts to save Jadhav. 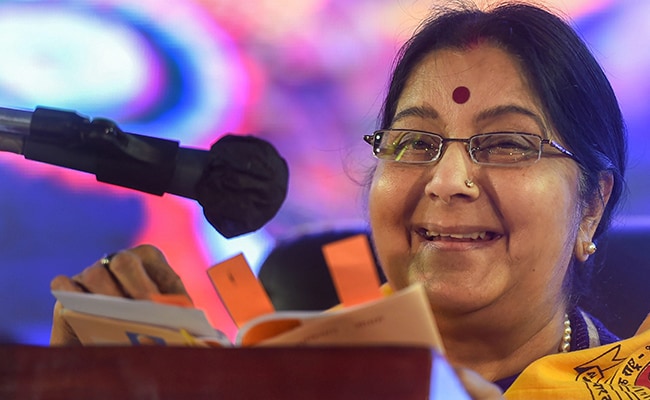 Sushma Swaraj was admired by political leaders across party lines

Moments before Sushma Swaraj suffered a cardiac arrest and was taken to hospital, she had a light-hearted conversation with senior lawyer Harish Salve, during which she asked him to "come and collect his fee of Re 1" for representing India at the International Court of Justice in the case involving Kulbhushan Jadhav, a former officer on death row in Pakistan.

The world court backed India's appeal and ordered Pakistan to grant consular access to Jadhav, who was sentenced to death on charges of spying in what New Delhi alleges was a farcical military court hearing. The World Court also said Jadhav's death sentence "should remain suspended until Pakistan effectively reviews and reconsiders the conviction and sentence."

Harish Salve shared the phone conversation he had on Tuesday evening with Sushma Swaraj, who, as Foreign Minister in Prime Minister Narendra Modi's first term, led India's diplomatic efforts to save Jadhav.

"She was sounding very cheerful and she was very happy. She was asking me why I haven't come and met her on this visit. I said I will come and meet her today (Wednesday). She said you have to come because I have to pay your fees. You commented somewhere that even that one rupee has not been paid so I have to give that one rupee for Jadhav's case," Harish Salve told NDTV.

"She was in a very cheerful mood and said I nowadays work in my daughter's office. I was to meet her today at 6 pm. I was so shocked, 10 minutes later she had a cardiac arrest."

Significantly, the last photo she tweeted was with Jadhav's family on July 25.

Kulbhushan Jadhav's family came to see me today. I wish them all the best. pic.twitter.com/CaXYaDXAUH

"(She leaves) a huge gap in Indian politics. She was an old generation politician...She knew how to disagree without being disagreeable, how to challenge without being offensive, she was eloquent, persuasive but never angry," Mr Salve said.

"She was very respected by members of her party and members of the opposition. Her character was such that anybody who met her would fall in love with her..."

Politicians across the board visited her home to pay their last respects to Sushma Swaraj, described as an outstanding orator besides a "People's Minister" with remarkable empathy and administrative smarts.