Hardik Patel's resignation letter to Congress president Sonia Gandhi aimed several zingers at Rahul Gandhi, who did not meet with him separately during his recent Gujarat visit.

Hardik Patel joined the Congress in 2019, just before the Lok Sabha election.

After days of sulking, Gujarat leader Hardik Patel quit the Congress today with a resignation letter pummelling Rahul Gandhi, who had brought him into the party in 2019. Top leaders, he wrote, "were distracted by their mobile phones" and the Gujarat Congress was more interested in ensuring "chicken sandwiches" for them.

Hardik Patel's letter was "dictated by the BJP" and he was pressured to quit, countered Gujarat Congress leaders.

The high-profile Patidar leader has been in touch with the BJP leadership over the past two months and is likely to join the ruling party within a week, sources said. Hardik Patel has, so far, vehemently denied the Congress-to-BJP switch that many young leaders have made in the past two years.

For the Congress, which just held a revival strategy meet, it is an ill-timed exit in Gujarat ahead of elections later this year.

Hardik Patel's resignation letter to Congress president Sonia Gandhi aimed several zingers at Rahul Gandhi, who did not meet with him separately during his recent Gujarat visit.

"When I met top leaders, they seemed distracted by their mobile phones and other issues as opposed to listening to issues concerning Gujarat," wrote Hardik Patel. "Senior leaders in Gujarat are more interested in ensuring that visiting leaders get their chicken sandwiches than engaging with people during yatras," he commented.

"Our leader was abroad when he was needed in India during critical times," Hardik Patel went on, echoing criticism heaped on Rahul Gandhi by critics including the BJP. 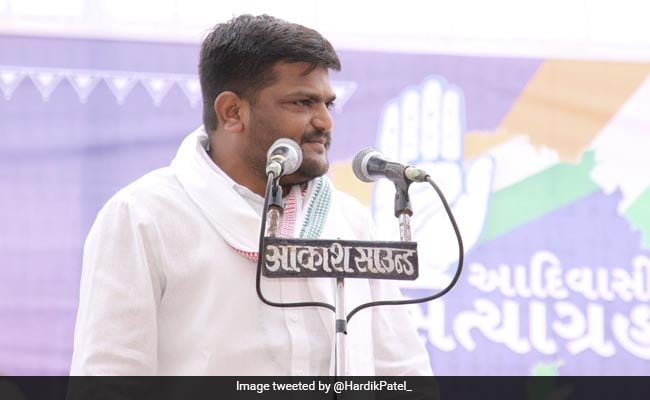 Hardik Patel was Working President of the Congress in Gujarat, a post that he said had meant little in his years in the part

The Congress leadership "strongly dislikes Gujarat and has no interest in the state", he said, adding that the party "has been rejected in virtually every state because they have no roadmap to present to the people."

The party, Hardik Patel said, "came in the way" of resolving key issues like the Citizenship Amendment Act, the Goods and Services Tax, the Ayodhya temple-mosque case and Article 370 (the scrapped constitutional provision that gave special status to Jammu and Kashmir).

Gujarat Congress leader Shaktisinh Gohil tore into Hardik Patel, reminding him of his criticism of the BJP in the past. He accused the BJP of using agencies like the CBI, Enforcement Directorate and Income Tax to target Congress leaders and force them to quit.

During the Patidar agitation for quota, Hardik Patel had likened Union Home Minister Amit Shah to "General Dyer (the British officer responsible for the Jallianwala Bagh massacre in 1919)", Mr Gohil said. He had also blamed the BJP for a sex CD controversy in 2017, just before the Gujarat election.

"His tweets and his quotes were always against BJP. Our leaders who have gone to the BJP have told us that they were given a script to write. Hardik's words are BJP's words and there is no truth in them," Mr Gohil alleged.

The Patidar activist joined the Congress just before the 2019 Lok Sabha election. He was made the Working President of the Congress in Gujarat, a post he said had meant little during his years in the party as he was never part of decision-making.

He had been complaining over the past few weeks about the Gujarat Congress leadership sidelining him and had compared it to the feeling of a "groom forced into nasbandi (vasectomy)".

When Rahul Gandhi visited Gujarat earlier this month, a widely anticipated meeting between the two did not take place.

"He was in Gujarat recently, but I think he was very busy. He will get back to me once he is free," Hardik Patel had told NDTV last week.

Gujarat Congress leaders, however, said that Rahul Gandhi had even skipped any mention of him at a public rally. The writing was on the wall, they said.