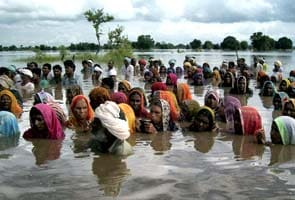 Harda, Madhya Pradesh: A day after the victory of those sitting on a jal satyagraha in Madhya Pradesh's Khandwa district, the focus today shifted to Harda where a similar protest is going on for the last 13 days. More than 30 villagers are sitting here in neck-deep water demanding the water level in the Indira Sagar Dam be brought down to 260 metres from 262 metres, and rehabilitation of affected people.

But unlike Khandwa, prohibitory orders under section 144 of the Indian Penal Code have been imposed here by the order of the Sub-Divisional Magistrate (SDM), citing health risks. Sources say if the protesters will not come out of the water, they will most likely be arrested.

Reacting to the announcement, the protesters have gone at least 200 metres away from the banks, into the water. 200 others are protesting outside.

Meanwhile, over a hundred policemen and Rapid Action Force personnel deployed in the area,
are not allowing anyone to enter or leave the place. The SDM and the collector of the district are at the scene and are taking stock of the situation. Tomorrow morning, Congress state president Kantilal Bhuria and leader of Opposition Ajay Singh will visit the protesters.

"The Chief Minister has not announced anything for us, just for the protesters in Khandwa. He has agreed to bring down the water level there, and to rehabilitate the people affected. Until they will accept our demands we will not leave, the chief minister has done discrimination with us" said one of the protesters.

"It is 13th day, and we are in continuous talk with the people. Their demands are of administrative level, therefore we are not able to assure them. Cheques are being given to them, we appeal to then to stop agitation," said Manjusha Rai, Sub-Divisional Magistrate, Harda.

The protest in Khandwa's Ghogalgaon village ended yesterday after 17 days when Chief Minister Shivraj Singh Chouhan agreed to lower the water level in the Omkareshwar dam, one of the key demands of the 51 protesters, sitting in neck-deep water.

Promoted
Listen to the latest songs, only on JioSaavn.com
Both Omkareshwar and Indira Sagar dams are built across the Narmada river and are part of the Indira Sagar Project. The water protests were launched with the help of the Narmada Bachao Andolan to demand proper rehabilitation for land that the villagers have lost and a reduction in the water level of the dam.

The unusual protest was highlighted by the media and brought widespread attention to the villagers sitting in water. The photograph of the shriveled, bruised feet of a woman protestor went viral on social networking sites.