Dussehra 2017 - All You Need To Know About Significance Of Vijaydashami

While the northern and southern parts of the country commemorates Dussehra as the day of Ram's victory over Ravana, the eastern part remembers the slaying of Mahisasura - the buffalo demon by Durga. 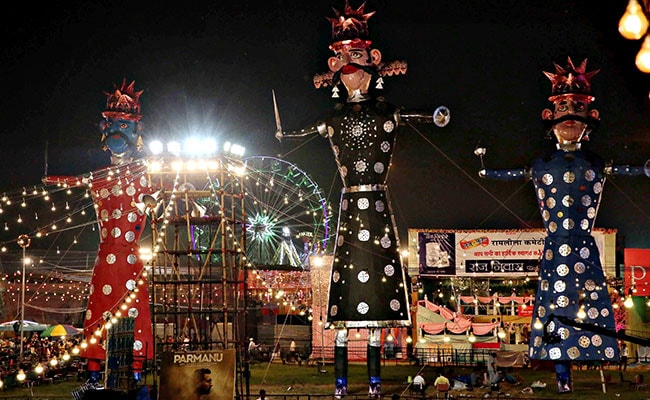 Dussehra 2017: This year the day is being celebrated on September 30. (PTI)

New Delhi: Dussehra or Vijayadashami marks the end of the nine-day long festive journey of Navratras. While the northern and southern parts of the country commemorates it as the day of Ram's victory over Ravana, the eastern part remembers the slaying of Mahisasura - the buffalo demon by Durga. Though each state adds its own flavour to Dussehra, its symbolism remains the same - the triumph of good over evil.

This year, the day is being celebrated on September 30.

In Sanskrit, the word 'Dus' means evil and 'Hara' stands for destruction and Dussehra essentially signifies restoration after chaos and destruction. It is symbolic of new beginnings and therefore marks the onset of preparations for the festival of lights - Diwali, which comes twenty days after the festival.

Enormous effigies of Ravana, who had abducted Sita, are burnt along with that of his brothers Meghanada and Kumbakaran in the northern and southern part of the country as part of Dussehra celebrations. Ramlila performances, which involve people enacting the life and glory of Ram through short plays, also form an essential part of the revelry.

The eastern part adds its own flavour to the grandeur where it is celebrated as Vijayadashmi - the day of Durga's return to heaven after purifying the world of evil forces. One of the most popular features of this day is the Shindur Khela, where married women smear vermilion on each other after making offerings to the goddess, to keep the joys of their married lives intact.

As Ravana is burnt, cries of joy fill up Ramlila maidaans.  At the same time, people prepare to bid tearful farewell to the Goddess as she prepares for her ride back to heaven in a different vaahan each year - this year her vaahan is a horse.

Promoted
Listen to the latest songs, only on JioSaavn.com
The day of Dussehra also holds a lot of importance for Buddhists in the country as it is on this very day, that the famed king of the Mauryan Empire - Ashoka pledged non-violence and converted to Buddhism.

Irrespective of cultures or beliefs, the connotation of Dussehra remains the same - the onset of a new journey after the end of evil.