The Assembly election outcome would definitely help the Congress party in the 2019 elections, he said. 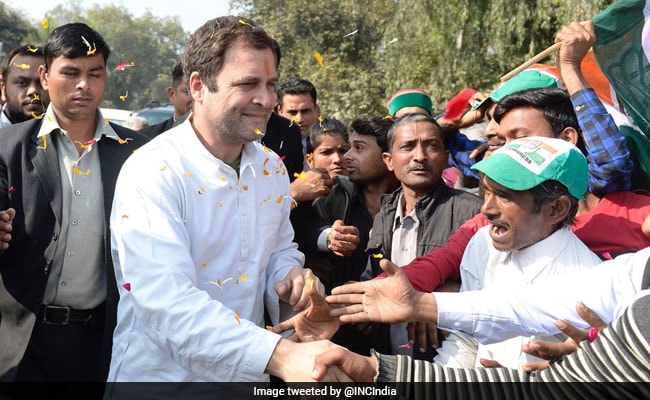 The "young and dynamic" Rahul Gandhi, would lead the Congress to victory in 2019, Patel said

New Delhi: The Gujarat poll outcome has instilled the belief in Congress workers that the BJP can be defeated, senior Congress leader Ahmed Patel said Sunday and exuded confidence that the party would emerge victorious in the 2019 general elections under Rahul Gandhi's leadership.

Patel, who had won the Rajya Sabha election from Gujarat last year in a close contest, also said the poll verdict in Prime Minister Narendra Modi's home state was a "moral victory" for the Congress as the BJP, which had talked about getting 150 seats, was wrapped up under 100.

"Prime Minister Narendra Modi addressed so many meetings and used all sorts of tricks from bringing Pakistan...to even saying that someone in Pakistan wants me to be the chief minister, but failed to polarise the voters," Patel told PTI in an interview.

"Gujarat poll results have boosted the morale of Congress workers, not only in Gujarat but all over India, and given them the belief that the BJP can be defeated," the 68-year-old leader said.

The Assembly election outcome would definitely help the Congress party in the 2019 elections, he said.

"The way Rahul Gandhi has campaigned in Gujarat, his hard work and the way he drew huge crowds were very encouraging and helped us win the seats we finally did," said Patel.

The BJP won 99 seats in the 182-member Assembly, its tally dipping from 115 in the last elections.

Had the BJP not "used their gimmicks", they would have been defeated in Gujarat, Patel claimed.

He said the Congress was constantly improving and would do well in the upcoming state elections this year.

The "young and dynamic" party president, Rahul Gandhi, would lead the Congress to victory in the 2019 polls, he said.

Asked if Gandhi, who took over as the party chief last month, would build a new team, Patel said, "The Congress president is consulting seniors; he is using youngsters also."

"He has a slot for everyone. He knows where to utilise whose expertise," the veteran Congress leader said.

On whether the Congress would stitch up an alliance for the 2019 elections, Patel said the ultimate goal was to defeat divisive and communal forces.

"We are prepared to take the support of like-minded parties, but it is too early to talk of alliances. Congress president and senior leaders will decide later," said Patel, who served as Sonia Gandhi's political secretary for about 15 years during her time as Congress chief.

Asked if the Congress was going through its worst phase electorally, Patel said, "When Soniaji had taken over, the Congress was (in power) in a few states; similarly under Rahulji, we will get more states. It's a question of time."

On the BJP projecting itself as championing the cause of Muslim women and the Mehram issue, Patel said women could proceed for haj without mehram (male guardian) because of a change in rules in Saudi Arabia.

Promoted
Listen to the latest songs, only on JioSaavn.com
Talking about the triple talaq bill, which has been passed by the Lok Sabha and is awaiting the Rajya Sabha nod, he said the Congress had demanded that the bill be forwarded to a select committee, so that all its provisions could be scrutinised.

Asked if the Congress was guilty of causing too many disruptions in Parliament in recent times, Patel said the party was only raising "genuine" issues.